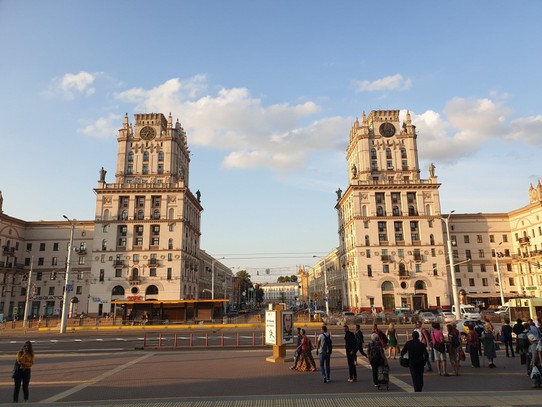 Gates of Minsk
After our easy entry into Minsk, we found our rather brown and Soviet looking apartment (impressive apartment block) just off a nice street not too far from the tourist areas.

We are in Minsk for seven nights, which is the longest we have stayed in one place since Beijing, almost three months ago. We have a kitchen and will cook some nights which will be nice and be able to eat our breakfast at "home" (in comfort rather than on our laps as we have done in some hotels). This is actually a luxury. So is a washing machine of our own.

I think sometimes that breakfast is the hardest meal to eat out overseas (well, except in France) as it's first thing in the morning, you have to actually choose a place (with Luke and I this is sometimes hard and leads to grumpiness), and then you have to sit around and wait, delaying the start off the day. Anyway no such issue for Minsk.

Our first day was a standard free walking tour. I was worried it was just the two of us and a guide who didn't speak amazing English, then a German turned up, another Aussie and some Brits with one year old twins. A nice group and quite chatty, which was nice. Luke even got to discuss the cricket with someone who gave a crap (this was before Australia retained the Ashes).

The walking tour wasn't amazing, and I don't think it showed Minsk off to its best. Minsk is a city of wide, grand avenues and spectacular Stalinist architecture, but this tour tried to make the most of a little pretty, but fake old town (after Riga and Vilnius, not exciting). We were told that the Minsk Duma was told to create it after a visit from Kruschev where he asked where the old town was. Why bother, when you could be talking about something that sets Minsk apart? Lucky the other people were good company.

I had a good chat to the father of the twins, who was around our age, about the difference in hostels these days (old farts I know) and how we had had very little luck meeting people in the ones we had stayed in. He said that they had had similar issues in this part of the world... maybe it's not just us then.

We have a few activities planned from Minsk, a day trip out to the Berezinsky Biosphere Reserve about 120km north of Minsk, a trip to the Stalin Line, a trip to the Khatyn Memorial and Glory Mound.

The Berezinsky Biosphere Reserve covers about 85,000ha, of which about a quarter is swamps (mainly peat bogs). We would only see a tiny part, including a museum of stuffed animals, a small zoo of rescued (live) animals, a quick walk through the woodland to a swamp (where wild cranberries grow - not what I expected) and kayaking.

We went with an English speaking guide, Tatyana who was really lovely, but it turned out that our guide at the Reserve also spoke excellent English.

The stuffed animals were ok. Good to know what is in the park, the caged animals were ok, the enclosures were pretty good, but I didn't like the cage the bear was in, and I was pleased to hear that they were all rescued animals rather than caught. We did meet a sweet but weird looking baby elk who hoped we might have food, but that was it.

The walk was quite nice but there was a lack of birds or animals, the bog was interesting, and seeing cranberries growing essentially on the bog surface with no bushes was interesting.

The kayaking. If you know Luke and I, we don't get on well in a shared kayak. I am pleased to confirm that this three hour trip (which felt like six hours) was no exception. We snapped at each other most of the time, well that was when we were talking to each other. Despite this we saw some gorgeous scenery, and kayaked in an ancient canal which has been used by everyone from the Vikings forward.

It was a nice day out, and thankfully we didn't get a tick, unlike our guide!

Next day it was off to the Stalin Line, which were fortifications set up about 20km outside Minsk, to defend Minsk and the western entry into Russia. We went on Tankmen Day. A day to recognise servicemen who served on tanks! This meant that there was a reenactment of a fight with Nazis, a T72 tank going round an obstacle course and firing its guns (and running over an old Lada car) with added pyrotechnics. It was a bit mad and quite surreal. There was also the opportunity to ride tanks and shoot guns (we did neither). It was quite busy and once again in a charming way, there were children (and adults) clambering over all the military paraphernalia on show. We saw some adults and children on some gun placements. I think the adults were having more fun pretending to work the gun than the children. We spent about four hours wandering round.

I also got to see a real life hedgehog! It must have been disturbed by all the banging and was heading for some toilets, a man picked it up (I took a photo) and then put it in some undergrowth. Where upon a stupid woman got it out for her children. Let's say, I don't think she spoke English, but she got the gist of what Luke and I said. Anyway when we checked back on it a little later, it was still in the grass area and not attracting attention.

On the Sunday, it was a trip to the Museum of the Great Patriotic War (known as WWII to us). Belarus, a nice flat county was right in the firing line (and had been for a number of wars/ invasions) for the Nazi's route to Russia. Belarus already had the Red Army entrenched in its territory, but was treated dreadfully by the Nazis who destroyed whole villages (and all their inhabitants), put to death all their Jews and then put c.66 death camps on their territory, including two specifically for children (!!). We saw a number saying that c.2 million or 20% of the Belarusian population died in WWII.

The museum had quite a detailed section on the partisan movement, which was well established and organised. Interesting to see the war from the eastern front perspective.

Afterwards we went to a cat cafe.

On the final full day in Minsk we headed to the Khatyn Memorial and Glory Mound (yes, I know) with Tatyana.

Khatyn was a tiny village about 50km outside Minsk and in 1943, after a skirmish with partisans that killed a famous German officer (apparently an Olympic medal winner) as reprisal, the Germans locked all the inhabitants of the town (men, women and children) into a barn and set fire to it. Killing all but one man and three children. Khatyn was only one of 628 villages that this happened to!

The memorial site is not just to Khatyn, but to the other 185 villages that were destroyed in the same way and never rebuilt, and the 433 villages that were rebuilt after the killings/ burnings. It also has a memorial to the people who lost their lives in the death camps, with each death camp named and how many people died there.

The place itself is terribly moving, set in a beautiful quiet woodland setting, with bells that chime each minute from the representations the chimney stacks of each of the 26 houses in the village that was burned.

Tatyana told us that no family was untouched by the war. her father was about six when his village was attacked and his mother killed, he then lived in the forest in hiding, before being sent to an orphanage as his father was in the army. Luckily his father and his five siblings all survived. She also told us that her grandmother was captured and sent to Germany during the war, but was lucky with the family she was sent to serve. The interesting thing was that when she came back to Belarus she had to keep the fact she was in Germany a secret, otherwise she would have been denied a job, viewed with suspicion etc. Apparently she kept it a secret until the fall of the Soviet Union.

The Glory Mound was a typical Soviet monument to the victory in WWII. The dirt to make the hill was brought from all the "hero cities" in Belarus. It is very typically Soviet.

On the way back to Minsk we stopped at the library for some views over Minsk. From the top you can see how many big parks are in the city and how wide the roads are.

Finally, the day had come to leave Minsk and head to the countryside. Our bus was at 3pm, so we took ourselves to the former workshop of the sculptor who was responsible for a lot of the Lenins we saw (and Stalin's we didn't), and other Soviet era busts and statues. The lady who showed us round spoke enthusiastically in Russian... besides the names of the sculptured person, I reckon I understood one word of 10... better than none I guess.

We met an English guy who had just finished his tour. He knew less Russian than me. I think he hadn't spoken to anyone English for a while as he seemed really pleased to meet us. We had a bit of a chat.

Anyway, our time in Minsk was over. We both really liked Minsk as a city. We had some good food at an Israeli restaurant, and decent flat whites at a coffee shop in our building. We had been surprised at the level of English in Minsk (signs, museum translations etc), I think we can thank the European Games for that. All in all really enjoyable.

Belarusians seem more outwardly friendly than Russians, but we'll have to see what we encounter in the country.

Next stop is three nights in a hotel in the stables of a 17th century palace in Nyasvizh. 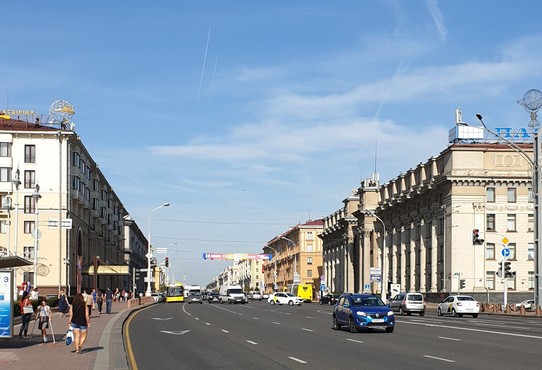 The main street of Minsk 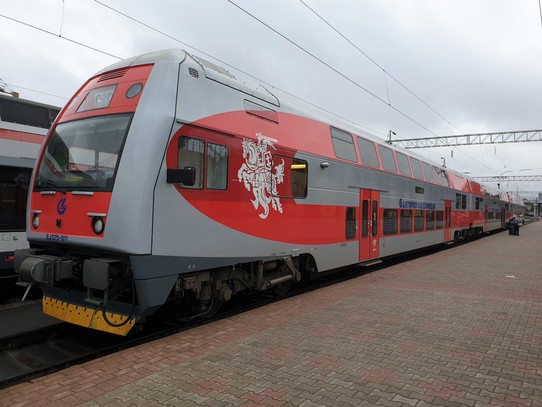 The Lithuanian train to Minsk 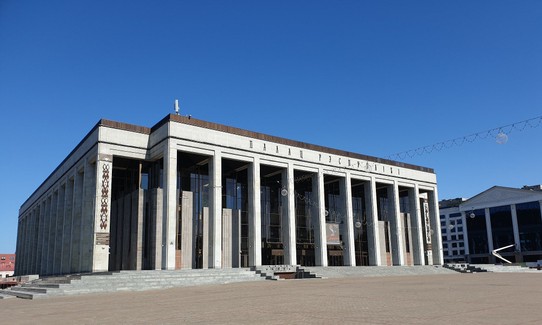 The Hall of Culture 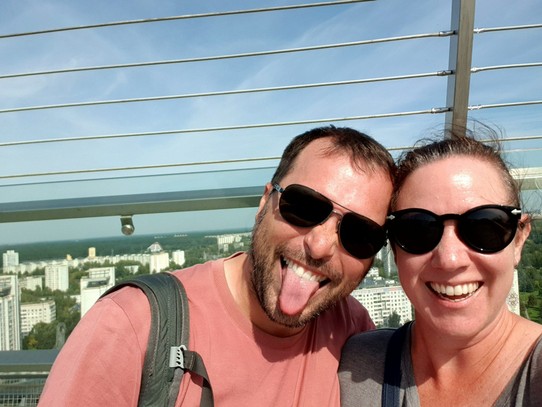 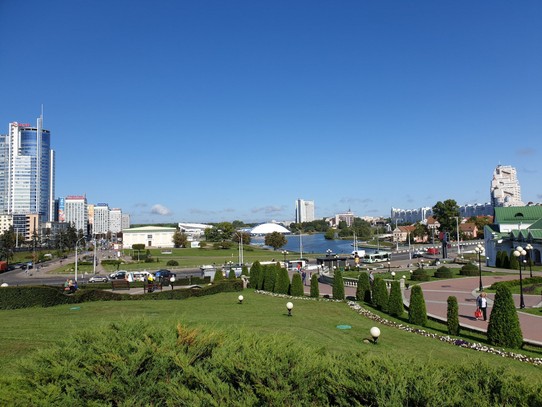 Minsk from the Old Town 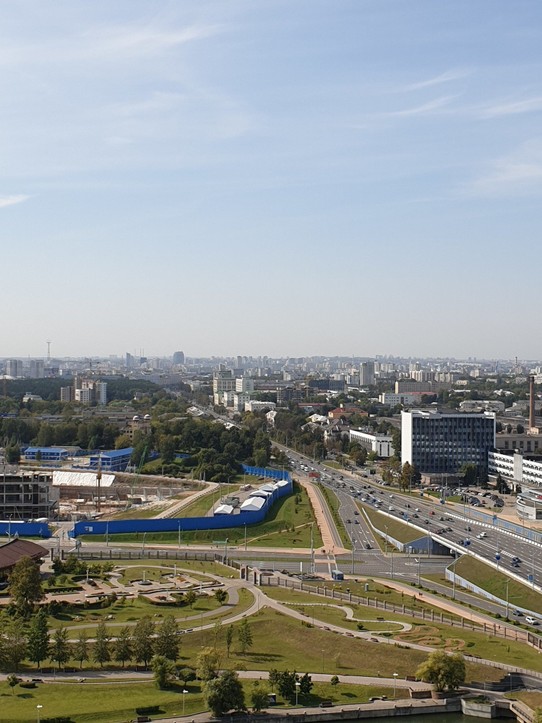 View from the Library 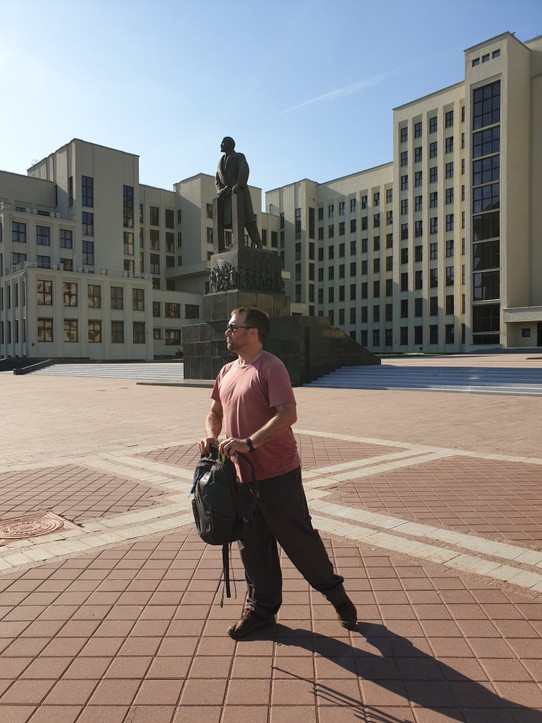 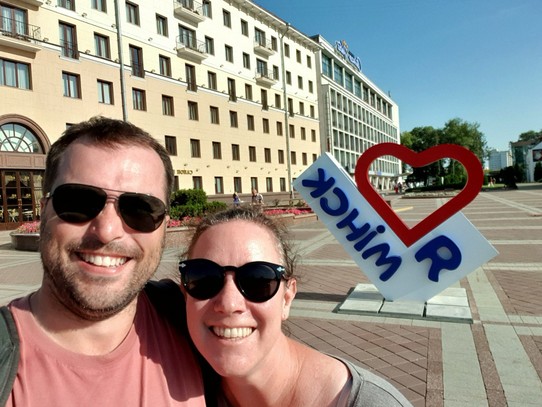 We finally found another I love... 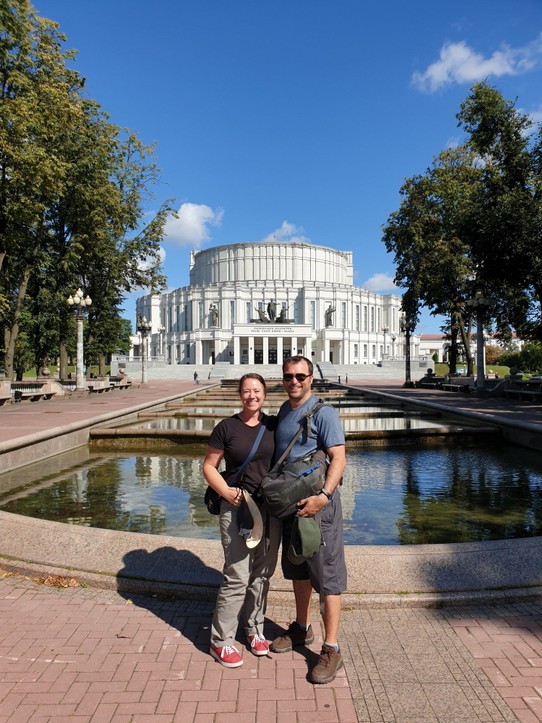 The Ballet and Opera theatre 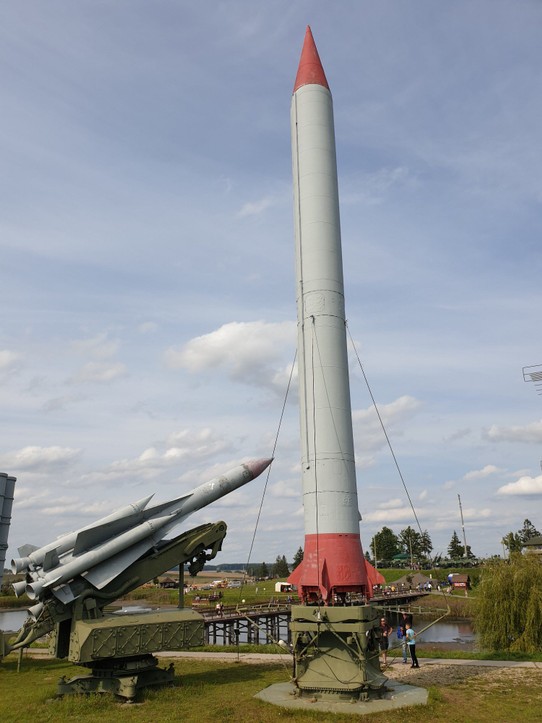 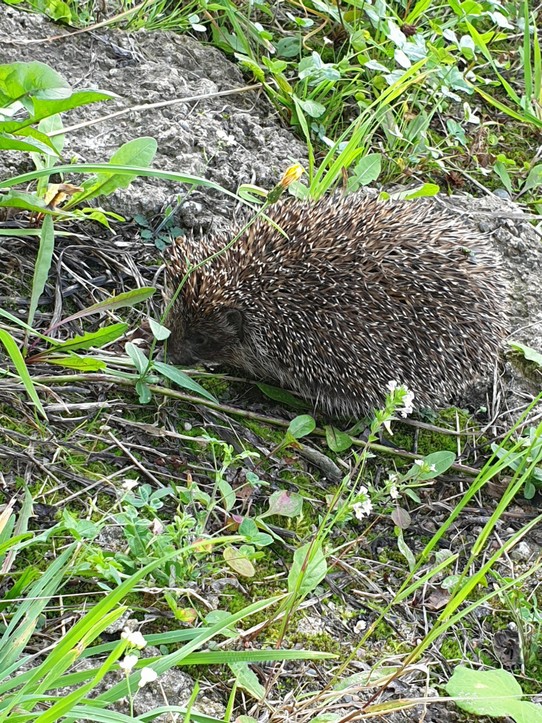 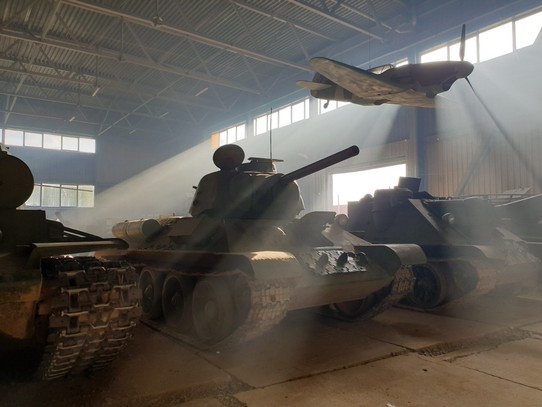 A storage shed at the Stalin Line 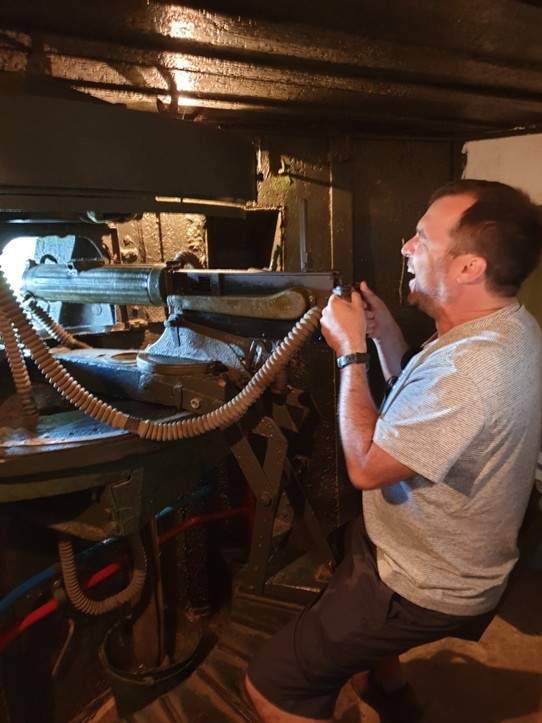 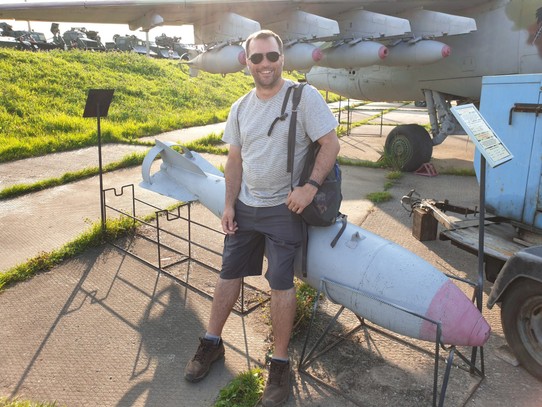 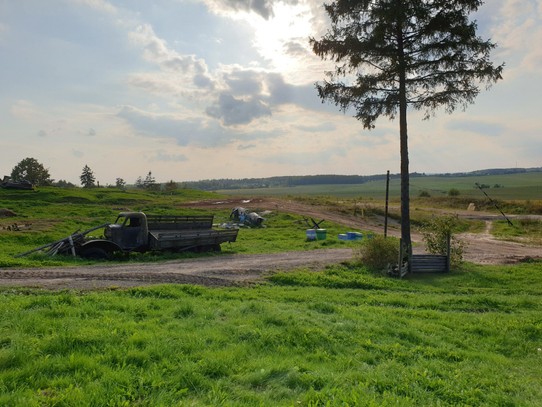 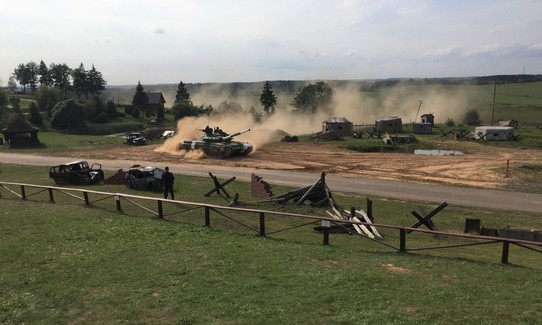 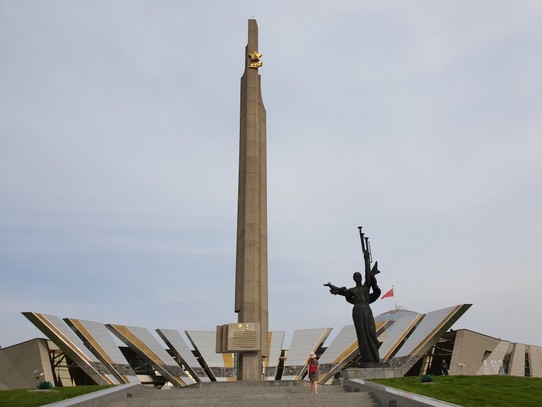 The Museum of the Patriotic War 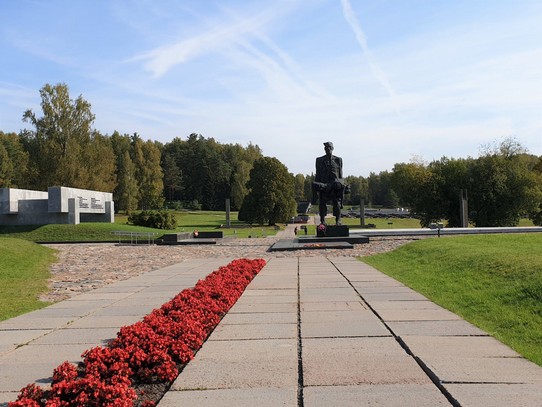 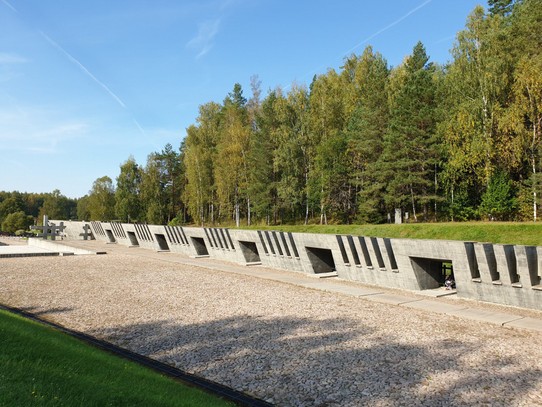 A monument to the death camps on Belarusian territory, the larger spaces represent camps where over 50,000 people were killed 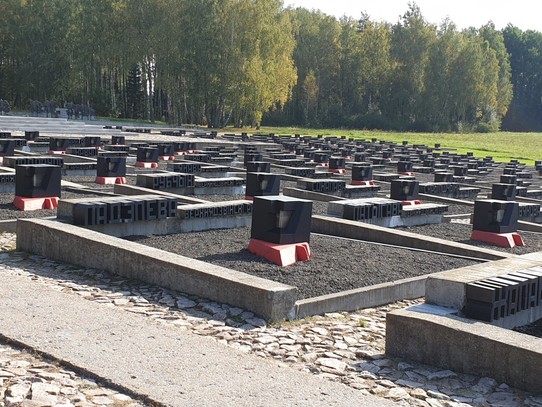 A memorial to the villages and villagers destroyed, and never rebuilt - Khatyn Memorial 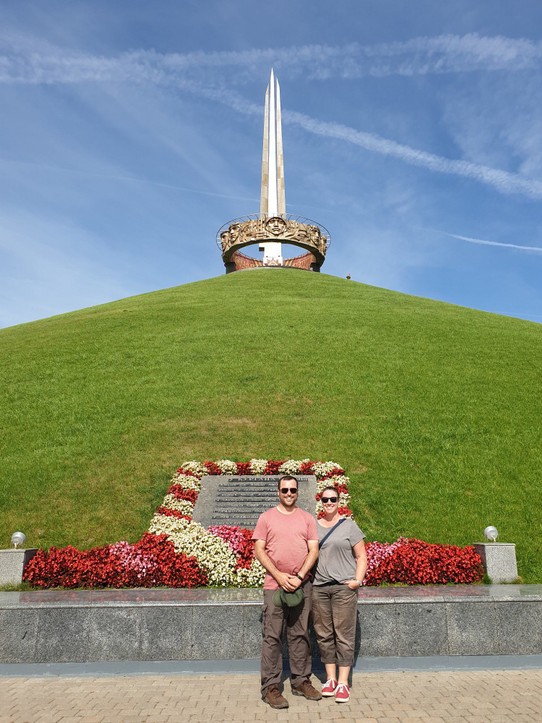 Us at the Glory Mound 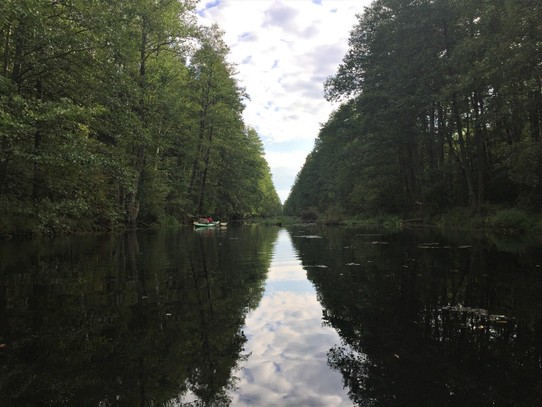 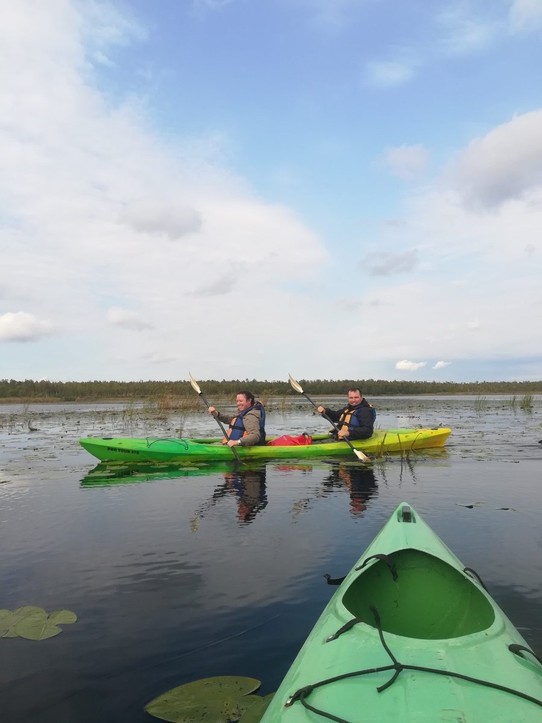 Luke and I looking like we are getting on 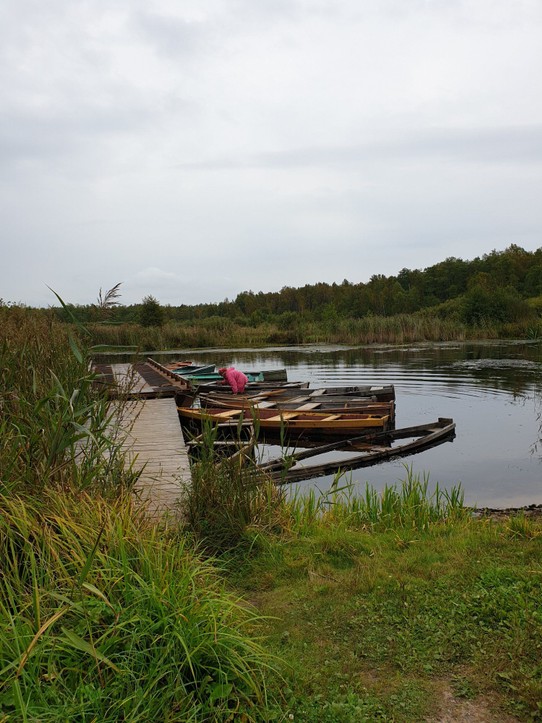