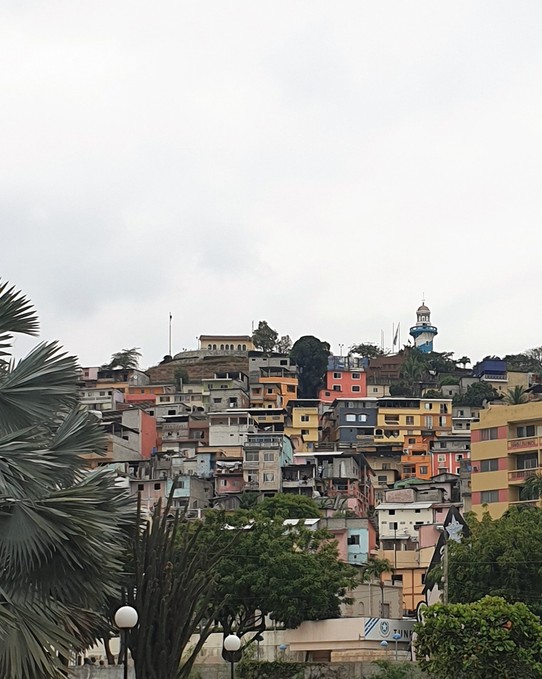 Cero Santa Ana
We flew straight from the Galapagos to Guayaquil, a port city whose river leads to the Pacific and it Ecuador's second largest city.

It was also where the government was moved to when there were the protests in Quito.

Luke got the bug caught on the Endemic the afternoon we arrived, therefore besides a quick trip for lunch and to the supermarket for water, he was not going to leave the room again for the next day or so.

Annoyingly, we got scammed at lunch as the people refused to accept a ripped $20 bill claiming it was ours, when it was not - spoiler we just went to the bank and got it changed, but it was annoying. It also left Luke with a bad impression of Guayaquil.

With Luke incapacitated, I went and got him snacks, antibiotics (thankfully ciprofloxacin is readily available over the counter) and electrolyte drink and then took myself on the free walking tour.

Mainly I learned that Guayaquil has been destroyed by pirates and fire a lot over the centuries, therefore nothing is old. Even the churches that look old, aren't.

We started at the iguana park. This park has heaps of iguanas that lounge around and get fed by tourists. They live on the ground and in the trees, and truly look like dinosaurs.

Next it was a wander down the Malecon 2000, the waterfront esplanade. The city's way of making the city more attractive and more tourist friendly... however we were warned not to walk there at night.

Most amusingly there was the La Rotonda monument, which was an absolute study in passive aggression. Basically they asked a Spanish artist to create it (Ecuador became independent from Spain and this monument shows Malecón Simón Bolívar and José de San Martín, meeting on the 26th of July 1822 to discuss what strategies they could come up with to try liberate the continent from Spain’s rulership), he firstly made the two men the correct heights (Bolivar was a lot shorter than San Martin), so he got sacked and they got a new artist who they didn't pay, so he made them out of proportion, not looking like the actual people, and standing in a suggestive manner! Amusing.

Next day Luke made it out for a wander along the Malecon and to see the iguanas. I won't lie, we finally went to a "Sweet and Coffee" (a coffee chain for rich Ecuadorians - given the price of things) for coffee, cake and air conditioning and we went to McDonalds.

We also made it to the Museo Antropologico y de Arte Contemporaneo (Ancient and Modern Art Museum) where there were a great many pre-Columbian artifacts, which were amazing in their modernity, and some rooms with modern installations. We spend a good hour wandering around the ancient stuff, and a good 15 minutes doing the moderns rooms. Heathens I know.

Next day, it was an Uber (at least we can trust them) to the airport.

The Galapagos will always be a highlight, and probably the place I will answer when asked for "the best place we went", however my feelings about Ecuador are mixed. I'm glad we came, however I won't ever say it was one of my favourite countries. The constant fear that you were going to get robbed or that people were out to get you because you were a tourist, just didn't really go away, and it left a sour taste. The walking tour guide in Guayaquil asked us what the govt could do better to make Ecuador more attractive to tourists. Without hesitation all of us said, make it safer for tourists to travel and enjoy the sites (the other people on the walking tour had met an older German lady who had been robbed twice, once she fell for a scam, the other she got her bag grabbed). I am thankful that neither Luke nor I had any problems (other than minor annoyances over money), but everyone we met had met someone who had been robbed or who had issues. Its a real shame. 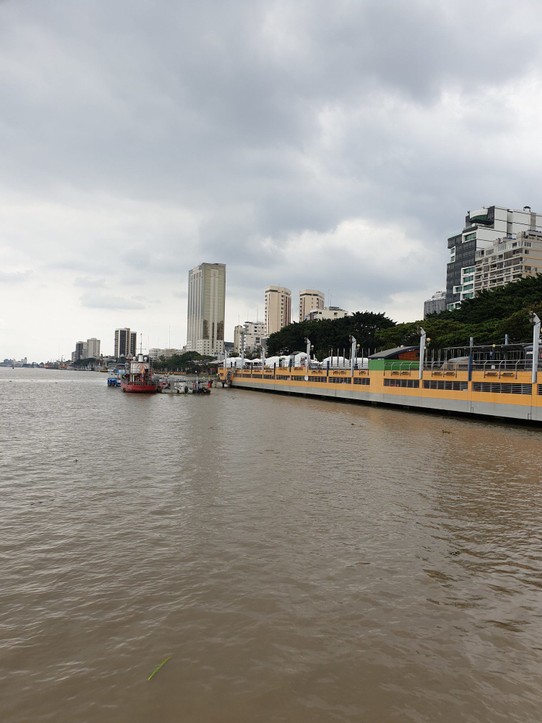 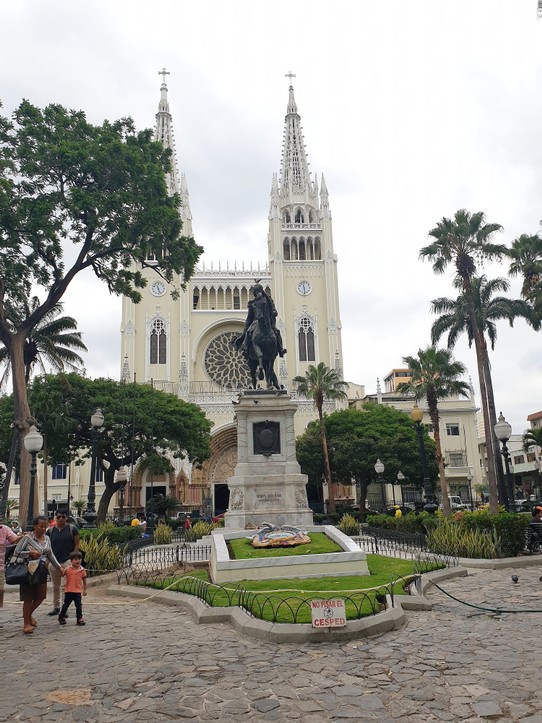 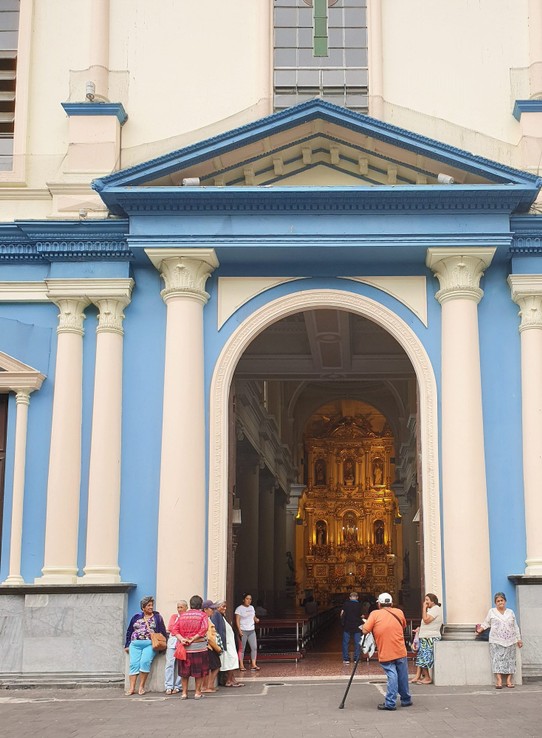 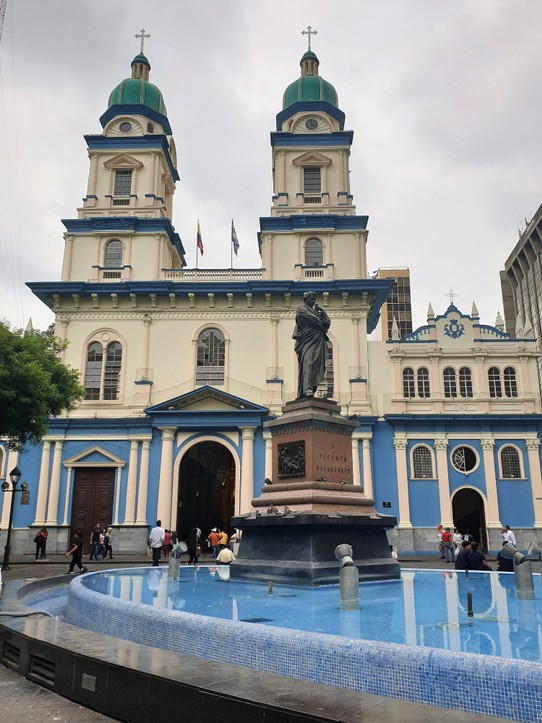 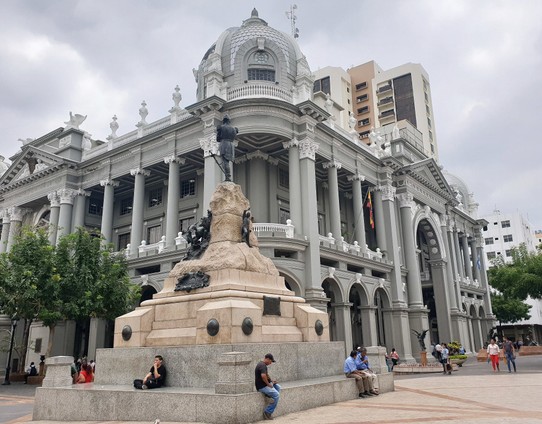 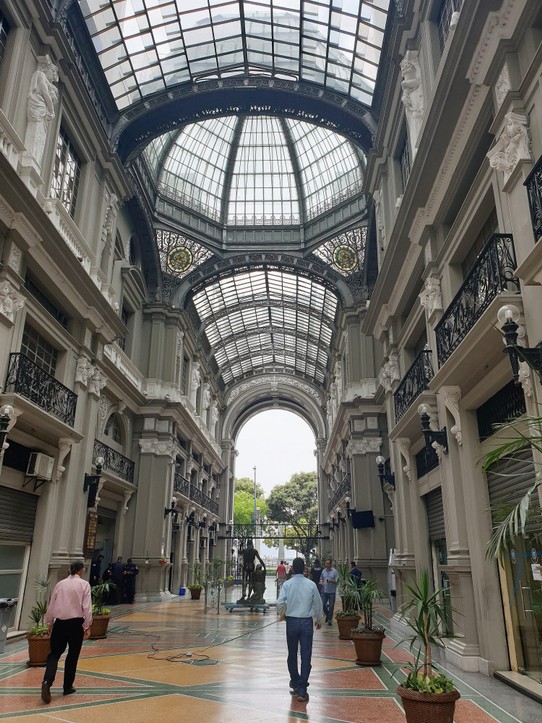 Inside the city administration building 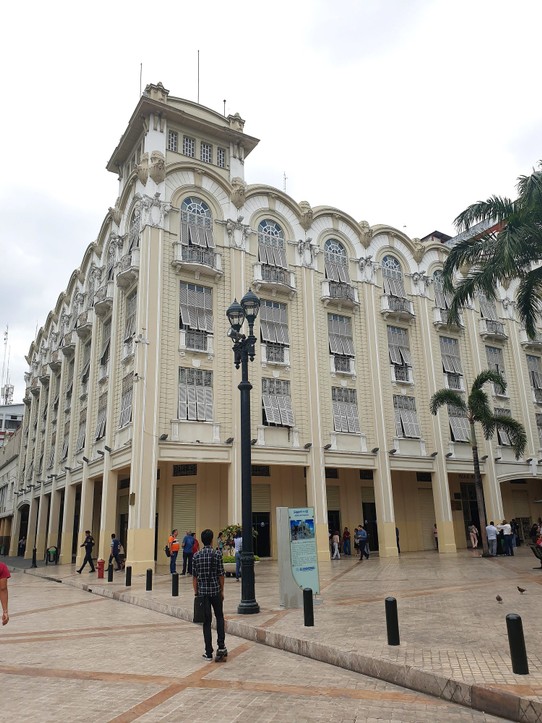 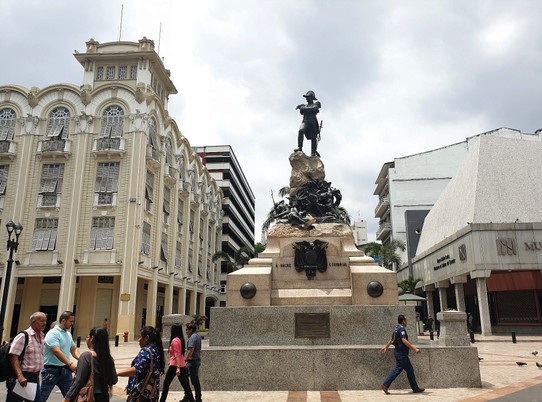 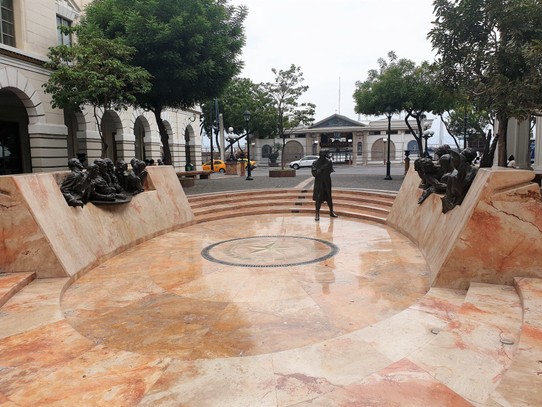 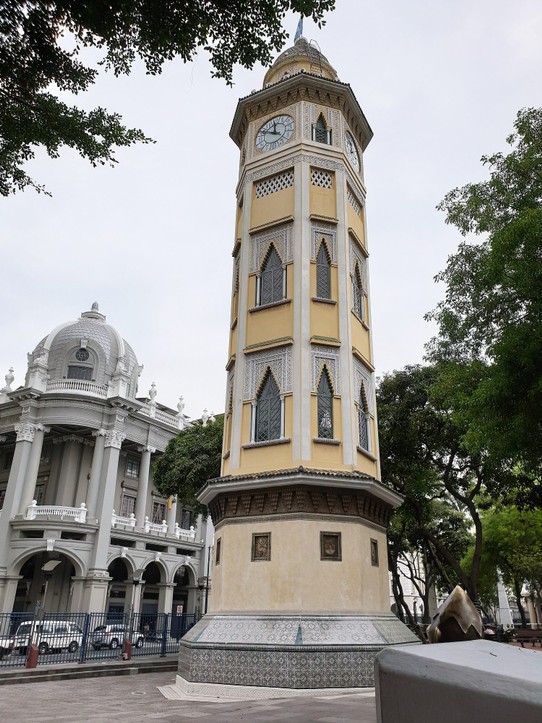 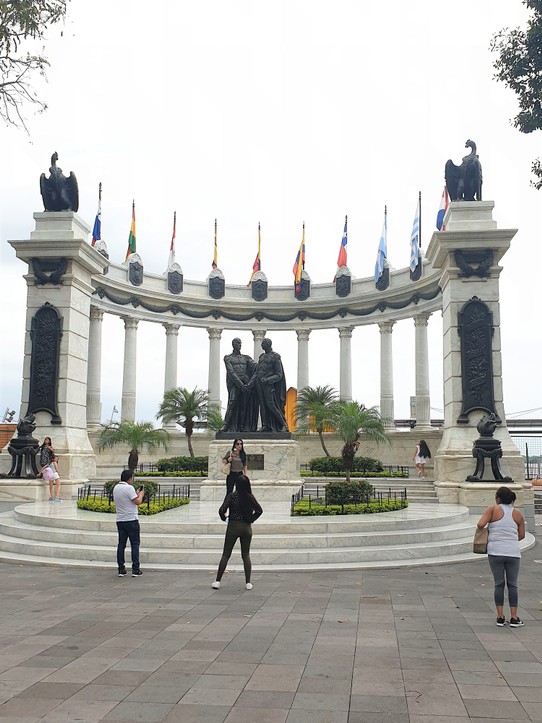 The Rotunda (with bad Bolivar and San Martin statues) 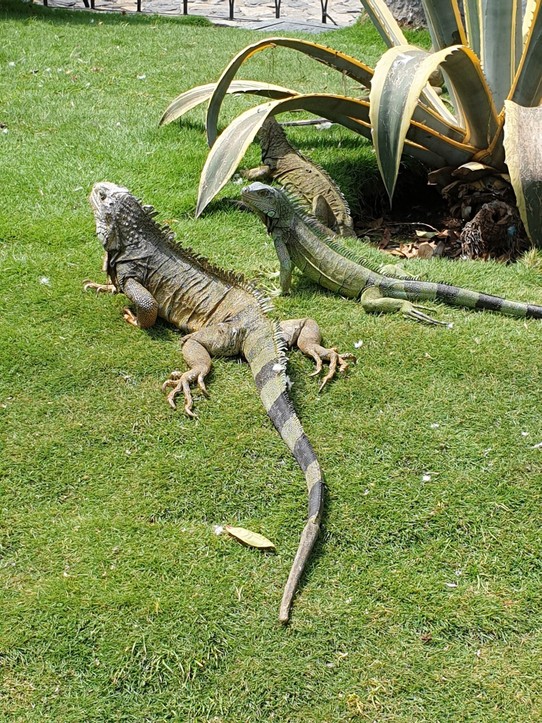 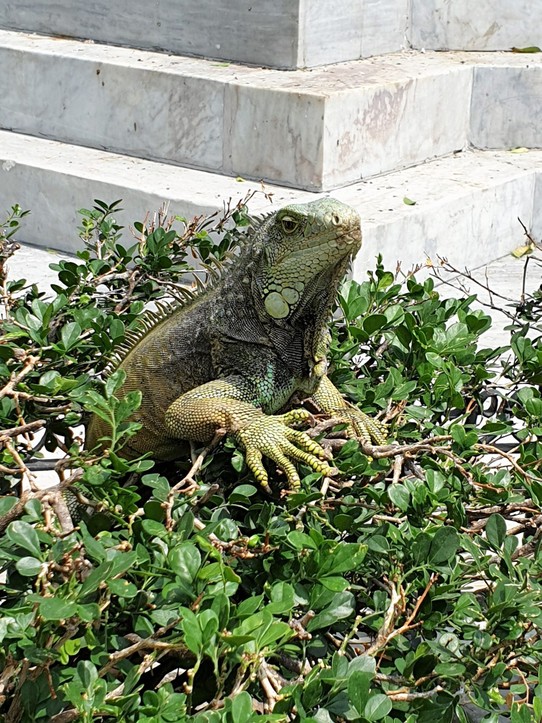 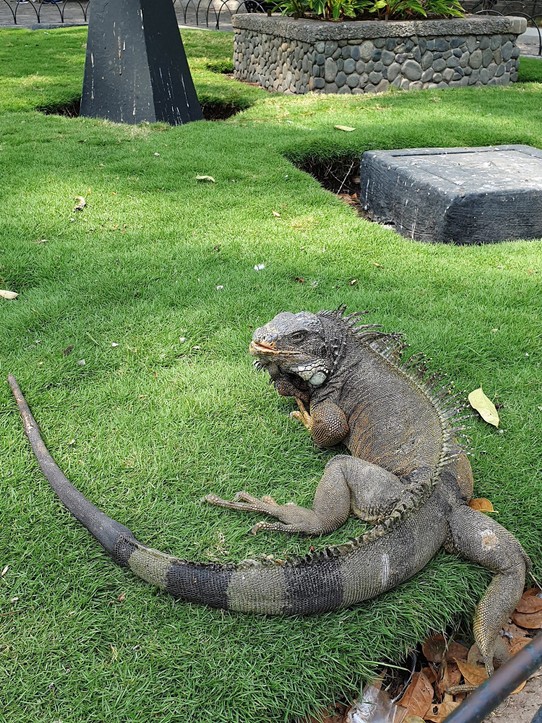 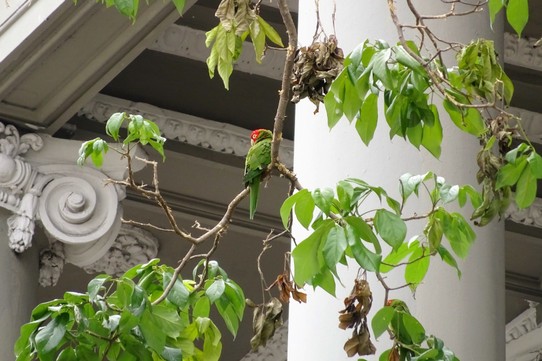 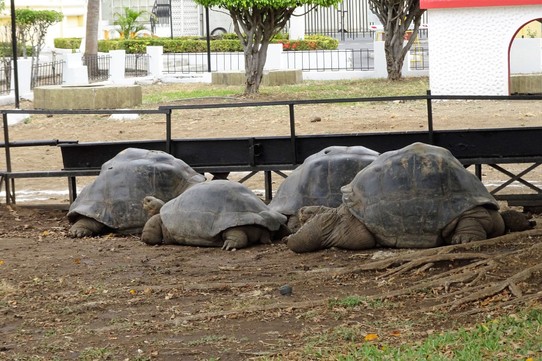 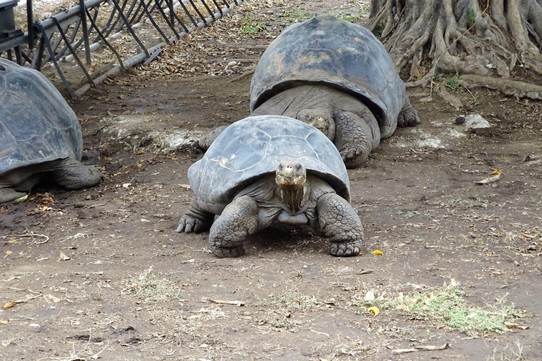 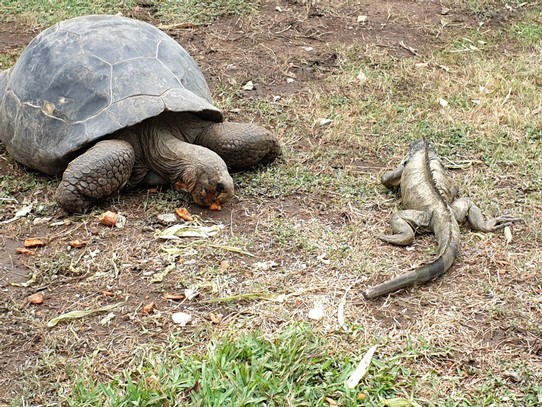 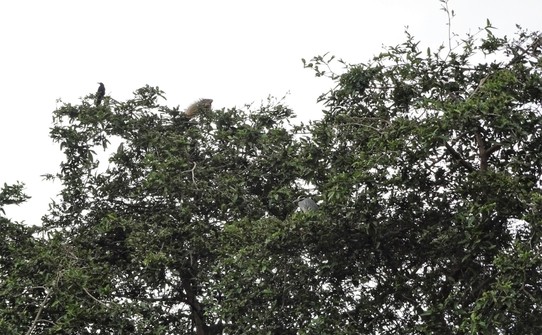 This tree had everything: birds, iguanas...