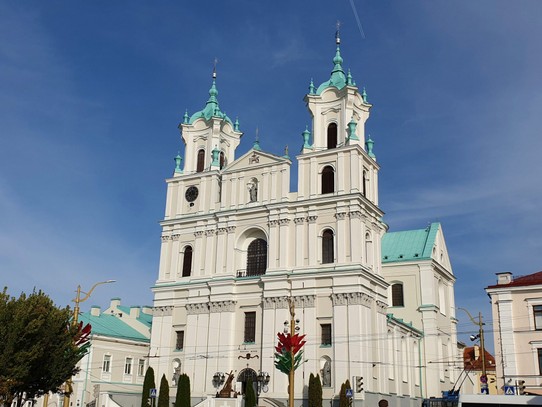 Francis Xavier Minor Basilica
After arriving about 2.5 hours later than we thought, we Yandex taxi'd it to our apartment. I think the hosts may have been waiting a while...

Anyway we got checked in to a nice studio (I thought it was a 1 bedroom) apartment, which was about 5 mins walk from all there was to see.

Grodno is near the Lithuanian and Polish borders and has been back and forth between Poland/Lithuania, Russia and Belarus, but most recently was part of Poland between the First and Second World Wars.

We were there as I had seen that they had a ruined Old Castle and a refurbished New Castle, as well as a few churches including an interesting medieval one.

The first day was a "City Day", the 891st birthday of the city. That meant there were heaps of stalls along the walking street, as well as folk singing and dancing. It meant getting the photo of Lenin was a little more difficult (any why Luke looks a little distracted - there were quite a few people watching), but the weather was turning and we wanted him in the sun. Anyway we had a good wander round.

We also decided to go book bus tickets to our next destination, Brest. As there was a a number of buses going, and we wanted a particular bus, I typed everything into Google Translate and feeling proud by translating it into Belarusian, we approached the ticket counter. The lady seemed very friendly and smiled when we showed her the translation. She put in the details, and asked to see the phone again, I showed her, she smiled, we smiled. All good. We got our correct tickets. She laughed when we said "спасибо" (thank you) and went away, very pleased with ourselves, saying what a nice smiley lady she was. I then checked my translation. I had seen a "do you mean..." but didn't have time to see what it was saying. I did not noticed until I looked again on the way out that I had actually asked for tickets to "breast" essentially I had gone up with my phone and looked all proud of myself and asked for tickets to boobies! So embarrassing! No wonder she was smiley and laughing, she was laughing at us, not with us! Well hopefully she had been able to entertain her colleagues with her story... the lesson is, always check your work.

Anyway, the weather was getting a bit chillier, and for the first time since Mongolia and we were forced to break out the jumpers.

Neither of the castles were particularly exciting, the Old one is being rebuilt, and houses a museum of the history of Grodno as well as a collection of local stuffed animals. The New Castle had already been refurbished and had icons and crockery. We got bored, and the audio guide was very long.

Even in the New Castle they had a room full of stuffed animals from around the world, including a tiny collection of Australian ones. I think the lady looking after the room (there are always ladies that sit and stare as you walk round the rooms), was also bored, so she decided to talk to us about the room, in Russian... She pointed out a few things and I understood my standard couple of words, then she got to the Australian case, so I told her I was Australian ("that's a long way", yes it is, very) and then she asked whether we had seen this particular large pigeon, we hadn't, in fact I had never seen one, not even in wild life parks and zoos. I have a feeling it might be from somewhere more tropical like Papua New Guinea which has much more impressive crested pigeons than ours, but hey ho.

Disappointed we hadn't seen the pigeon, she pointed at the wallabies, to which we were able to say yes. Being satisfied with that, she moved on and told us about the stuffed Polar Bear that had come from the local zoo... did we want to take a photo... no. No we did not.

Anyway, we saw the churches and cathedrals (Catholic and Orthodox, there is a mixture here), and went to the Boris and Gleb Church which was a 12th Century church (the oldest structure in Grodno) that had glazed tiles on the forming crosses on the outside. It had lost a wall in the 19th century, therefore rather than trying to recreate the missing wall, they had built a plain one. I liked it. Sometimes it is ok to not restore something to look like the original. It made a change.

Grodno was a nice little city, glad we stayed there, there was English on some menus but we didn't see any English speaking tourists, until there were a couple of Japanese tourists on the bus to Brest.

We got to pat some cats too, but none as picturesque as the palace cat.

Funnily enough, the best English we had throughout our whole stay in Grodno, was the taxi driver on the way back to the station. He had lived in Europe for 6 years and spoke English really well. Our chat with him was the first real conversation we had had with a Belarusian since our guide in Minsk. He seemed very pleased when we told him that we found Belarusians more friendly than Russians.

Catching our bus to Booby, we moved on to Brest, Belarus' third city. Where we would be getting closer and closer to the Polish border, with Brest almost sitting on the border. It would be our last stop in Belarus. 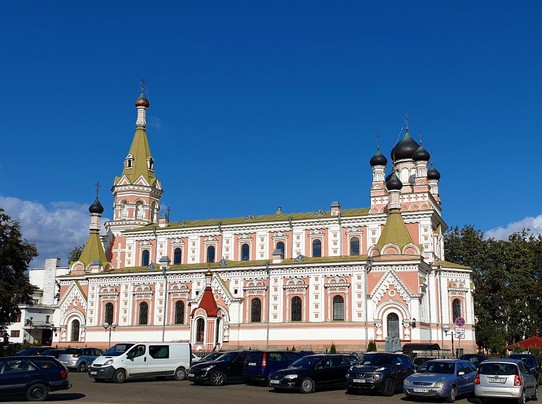 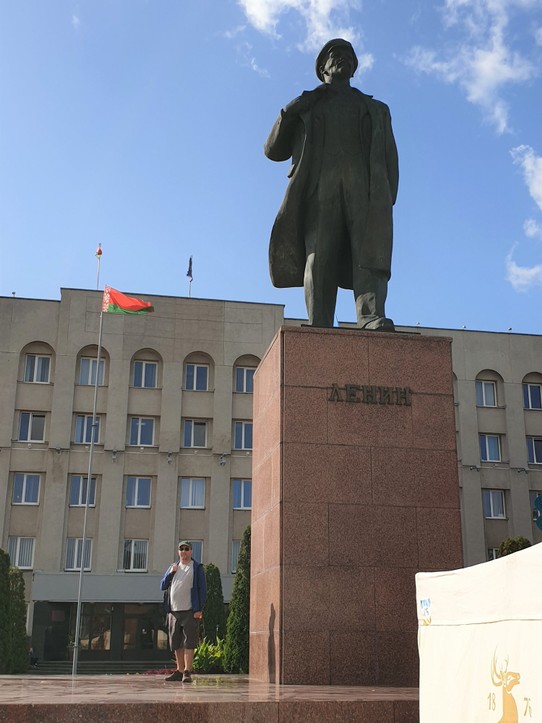 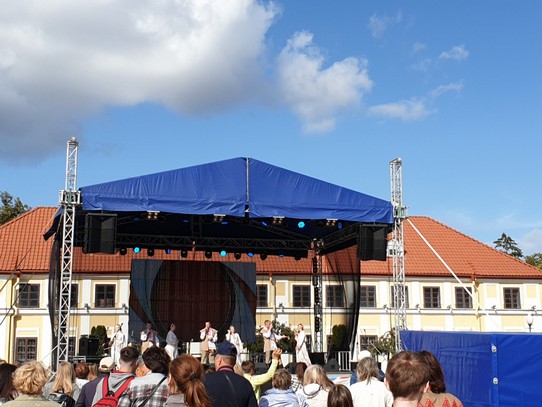 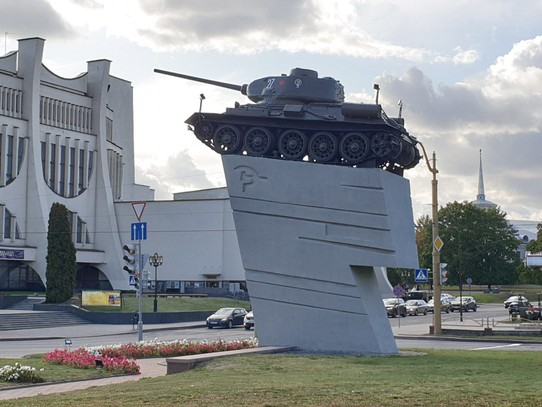 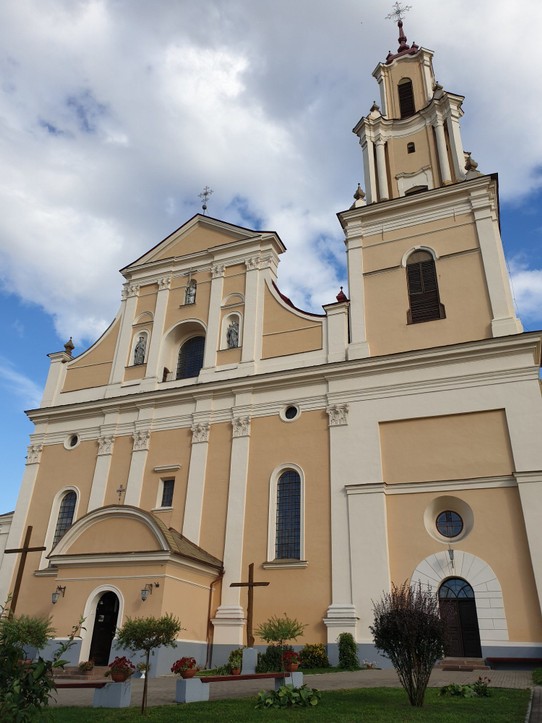 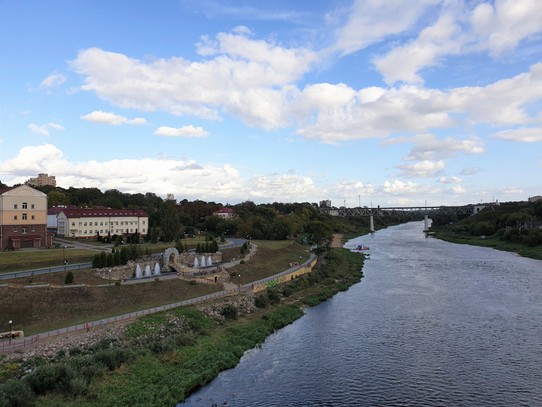 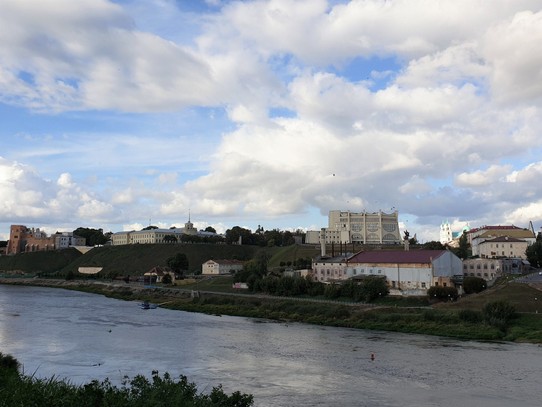 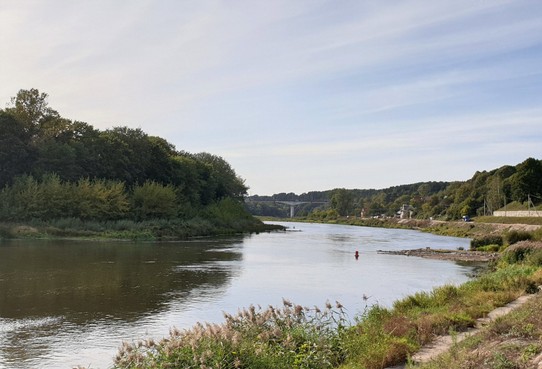 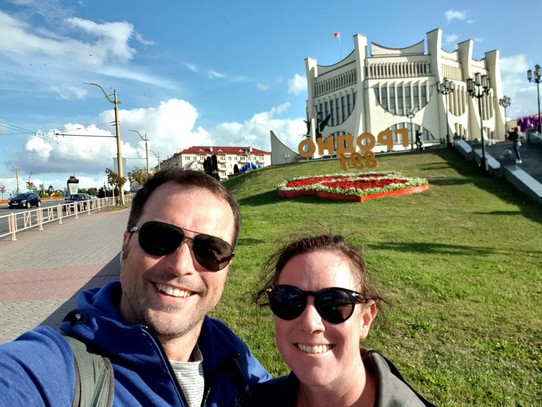 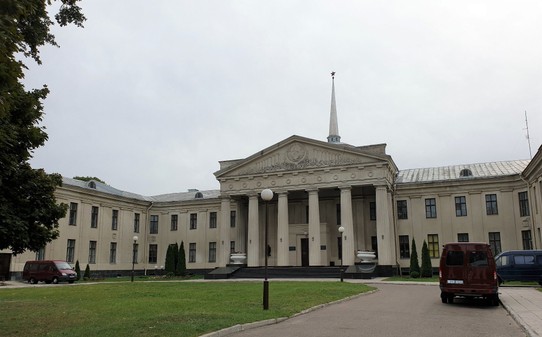 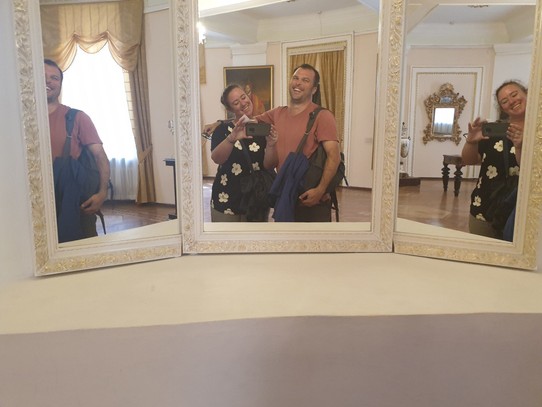 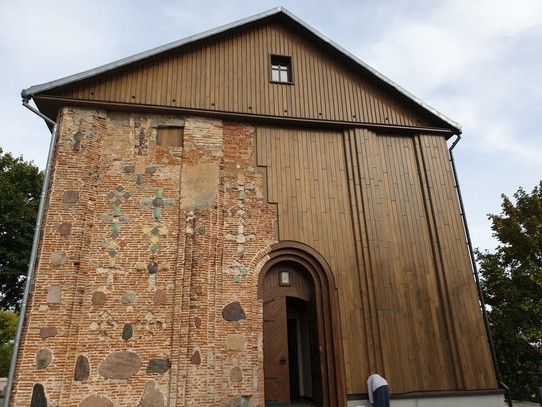 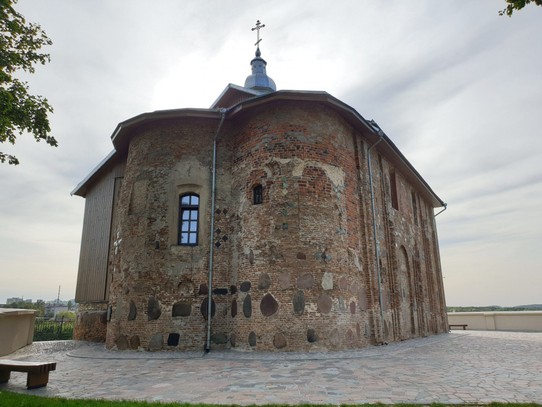 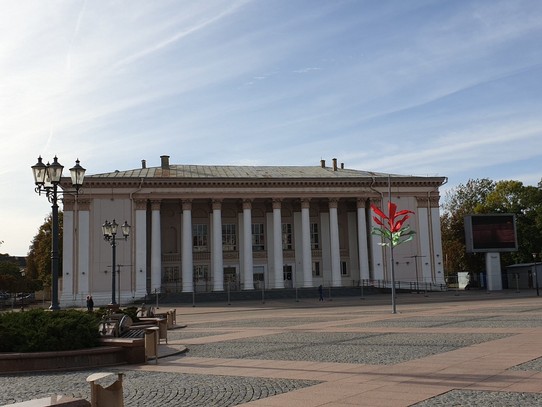 Opposite the Minor Basilica - a Soviet Administrative building