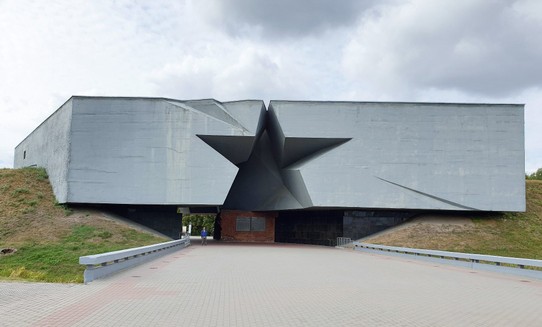 The inconspicuous entrance to Brest Hero Fortress
We arrived in Brest at a very nice modern bus station (probably the nicer we have seen anywhere) and an impressive train station, which had a mini version of a Stalin Sister (perhaps a younger cousin?). All very impressive.

I had booked us here for four nights as there was a national park to see, as well as churches and a "Hero Fortress". It was perhaps a day too long, but that was ok.

I'm sure I've said, but travelling is actually tiring, especially changing locations. You have to pack the bags, make sure nothing is left (we've been pretty good, only a plug and some cheese have been left behind at certain points and both were replaced easily), then get to the station, not speak the language and work out where to go and what to do. After three months, we are starting to look forward to England where things are familiar. And where we can have regular conversations with people other than someone who knows exactly what you did that day, as they did it too.

Don't get me wrong we are having a good time and seeing so much, but we are also looking forward to familiarity, M&S food, perhaps a trip to Sainsburys (or Waitrose!).

Anyway, back to Brest.

Brest is very close to the border of Poland, and was another city that has previously been both Belarusian and Polish (and Russian) over time.

The first day we wandered through the walking street, and decided on a nice place for dinner the next night (when we were slightly better dressed) and found our nearest supermarket etc.

The weather has turned and it looks like it won't be the best for our days here.

Next day it was a trip to the fortress (free except for the museums) to see the various monoliths and statues, including the one that graces the front of our Belarus guide book.

I tell you what, you can't miss the entrance... It even plays music... unsurprisingly there were tanks.

The statues were all very impressive. Generally they were built in the 1960s/1970s and were really very Soviet.

We went back the following day, when the weather was worse, to go through the museums.

I can see why the fortress became a symbol of the fights against the Nazi's as they defenders of the fortress were unprepared for the attack, hadn't evacuated their families, and against strong odds they continued to fight for 7 days with 6800 soldiers captured if you follow the German sources and 32 days with no surrender if you follow the Soviet sources (although it seems to be agreement that there were pockets of resistance from the basements until late July). The museums made clear the horrible conditions these defenders were subject to, as the Nazis cut off water and food supplies and essentially the only weapons they had were scavenged ones.

One of the museums had pictures of a lot of the defenders and whether they had survived or died by a black (died) or white (survived) background on their pictures. It was tough, especially when you saw the pictures of them with their families, where the soldier might have a white background, but the picture is split and the family are backed by a black background.

Anyway, both museums were quite a lot.

Our third day was a trip to the Belovezhskaya Pushcha National Park.

The National Park is about an hour by bus (nice easy shuttle buses) from Brest and straddles the Polish border (there is actually a border post in the park) and is home to European Bison and other animals (obviously). Like the other reserve, there are also animals in fenced off areas including examples of said Bison.

We got there and decided to cycle. Unfortunately the smaller route wasn't open, so we were informed by the ticket lady who didn't speak English, that we would be doing the 19km trail...

Even though it looked like it was going to rain shortly, we set off with our picnic of crackers, cream cheese and cucumber (standard) on bikes that had no gears and back pedal brakes.

The cycling was relatively flat, and had various information boards (which had English) about the bits of forest. Overall it was a nice cycle, although from time to time we would have liked gears.

When we read there was a Polish Border point in the park, we didn't expect to just come across it on our bike trail. At first I thought it was a mock up concentration camp, as it had barbed wire and a "kill zone", but no, just a controlled border!

The cages with animals... well let's say I hated the bear cages. It seems that the Belarusians do not keep their bears well. The Lynx cage was too small too. Upsetting.

It seemed that the wolves had taken matters into their own hands and had decided to join their cages together, so I presume there will be wolf cubs in the near future? They seemed to be used to humans (they must get fed by visitors) as they ran to the edge of the cage when they saw us, wagging their tails, just like sort of scary large dogs. If you wanted to lose a finger, you could have tried to pat them I guess.

The remainder of the cages were pretty large and mainly contained different species of deer. Then there were the Bison. The young males expect to be fed by visitors, so come up to the cage edge. We didn't have food, but I got to touch a nose before it realised I had no food and moved on.

Anyway, after avoiding the rain storm, we caught the bus back to Brest snoozing (quite loudly in Luke's case), and then realising how much our legs, knees and bums hurt!

We had been trying to avoid standard Belarusian food for a couple of days. There are only so many potato dishes with dill and sour cream you can eat! But for our last meal, we hobbled our way to the walking street to have borsch, Greek salad (everywhere in Russia, but the feta is not really feta) and driniki (like hash browns) and drink Mors (a cheap berry juice drink that I had been drinking throughout Russia and Belarus).

Overall, I am glad we have come to Belarus. To be honest before reading up about it to plan the trip, I didn't know much about it, or really what to expect (especially as it is known as the last dictatorship in Western Europe), but it has been an interesting place. Especially comparing it's attitude to Russia to the other former SSR's we have been in. Mongolia we were pointed to the bad things that the Soviets did, but also that Mongolia sees Russia as a "big brother" and preferable to China, to Lithuania who are very happy to distance themselves from their Soviet past, to Belarus where very strong ties are kept with Russia and (sorry for saying) you could almost think you are still in Russia (but with generally friendlier people).

Next day it was off to Poland for three nights in Warsaw.

Being a Friday, the train was packed with Belarusians going to Poland for the weekend (it's only a 2.5 hour trip).

I think we were the only non Russians/Belarusians on our carriage as our passports caused a bit of a stir and delay on the way out of Belarus and eventually had about 4 border staff huddled round working out what to do.

As you are already aware, we had to get good old fashioned visas as we weren't arriving by plane (you can now travel visa free for 30 days if you arrive by plane into Minsk airport). On top of this you are required to register where you are staying every 5 days. Up until this year, if foreigners were staying in anything other than a hotel (who do it for you) foreigners had to actually attend the citizen and migration office and pay money. To register now days you can do it online, but only if you create an account, and only once.

We were told you had to keep your registration slips or take a screen shot of your registration online for exit. I had kept them all, and was slightly worried as we hadn't registered in Grodno, but apparently that was ok. Anyway the border guards didn't even check, and worked out in the end, so all good.

I changed to my British passport on the way into Poland, and inversely, we were the easy EU people, and it was the Belarusians who got quizzed about their travel plans!

Anyway, it now feels like we are on a downhill stretch to England with only short stays in Poland and Germany (and a night in Belgium). 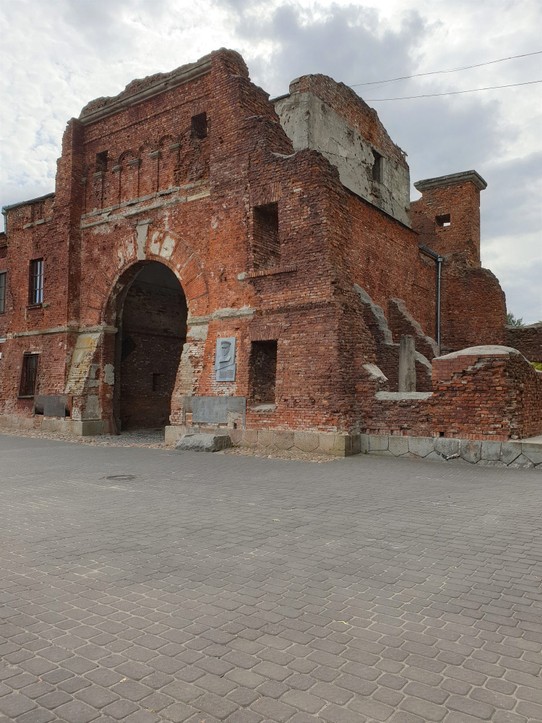 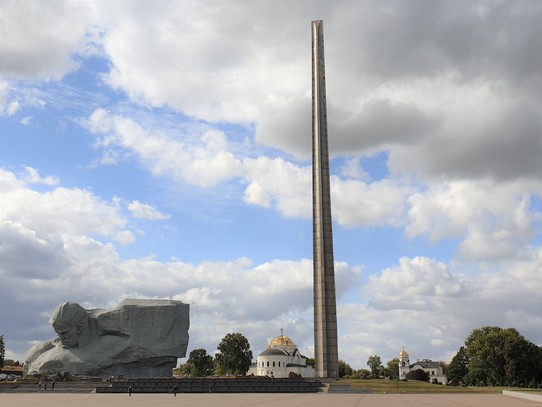 The memorials in the fortress 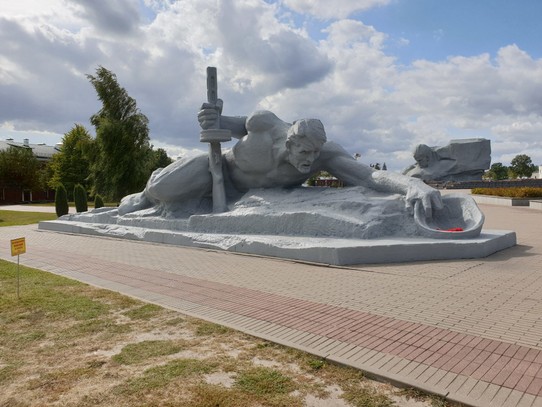 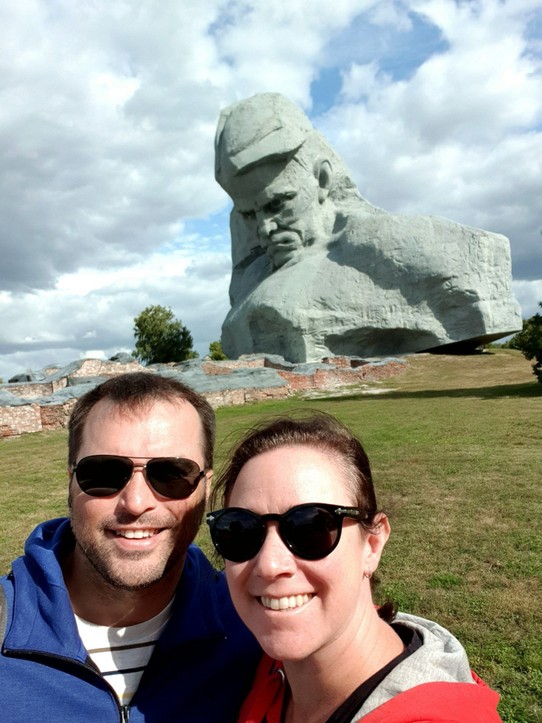 Us and the "Main Monument" 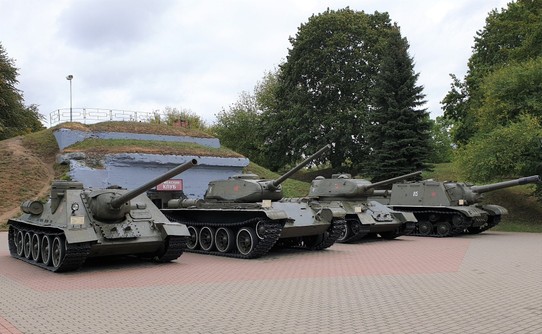 Of course there were tanks 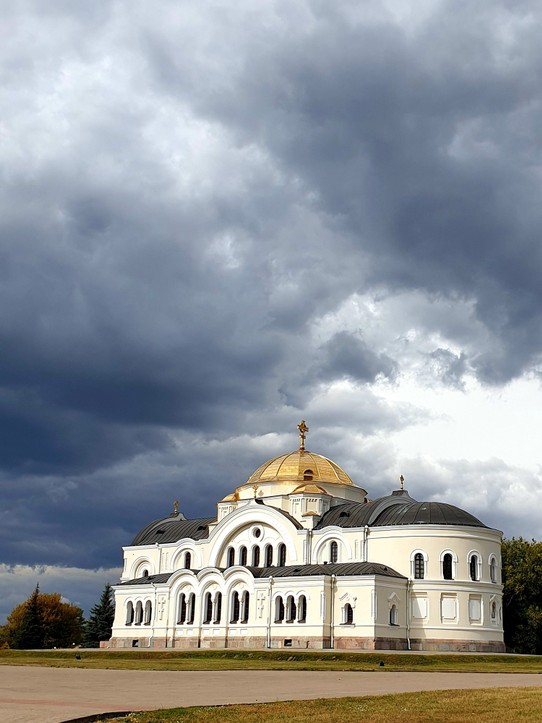 The Church in the Fortress 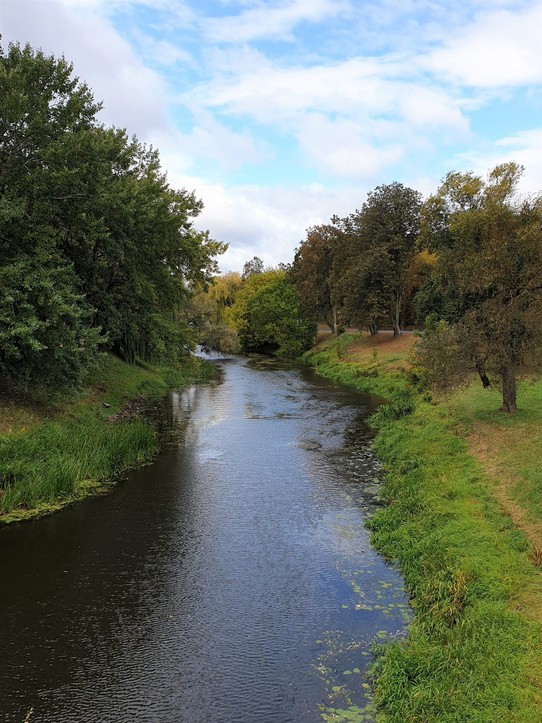 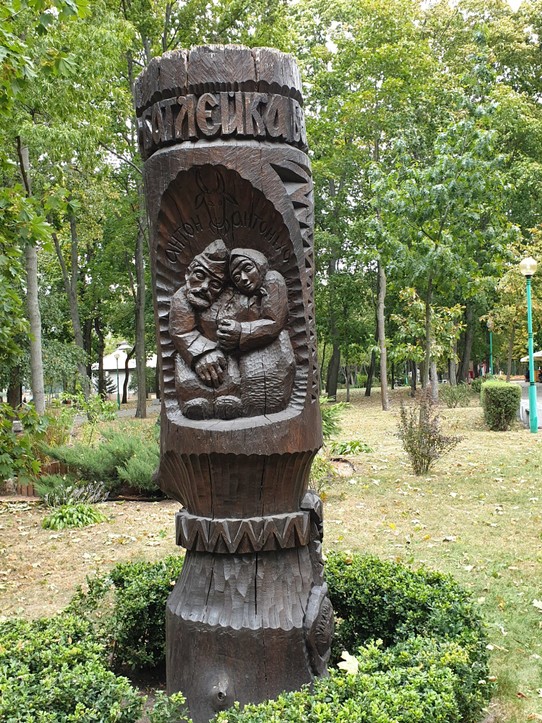 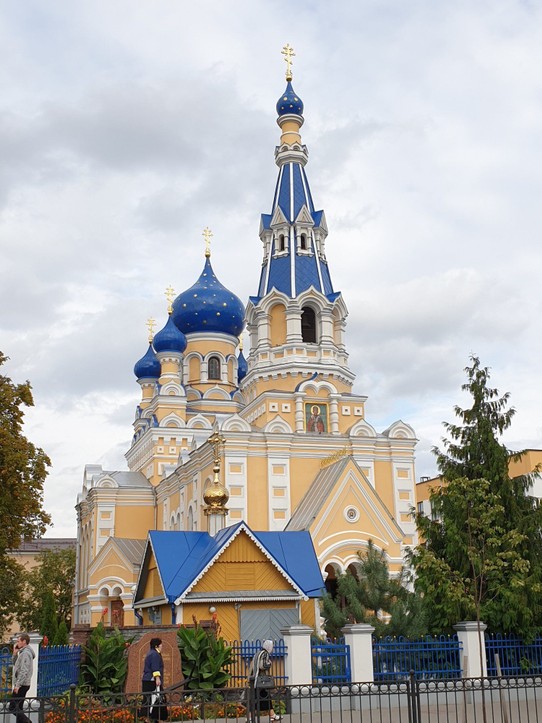 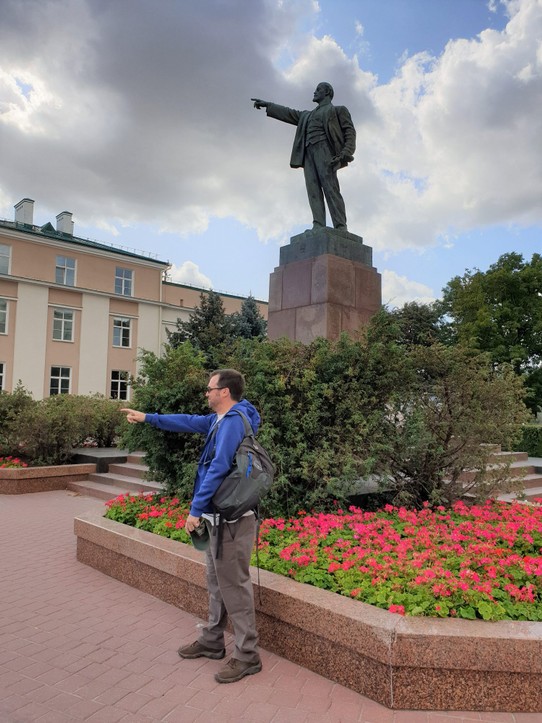 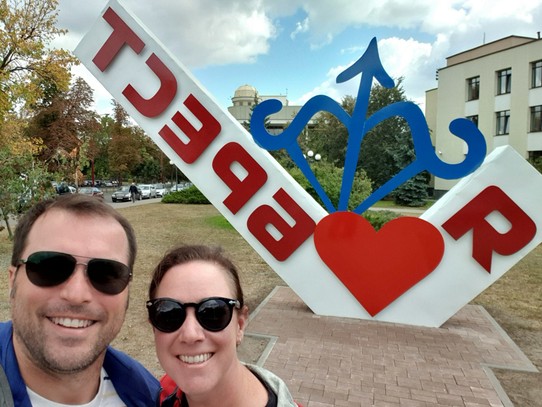 Another I love... in Brest 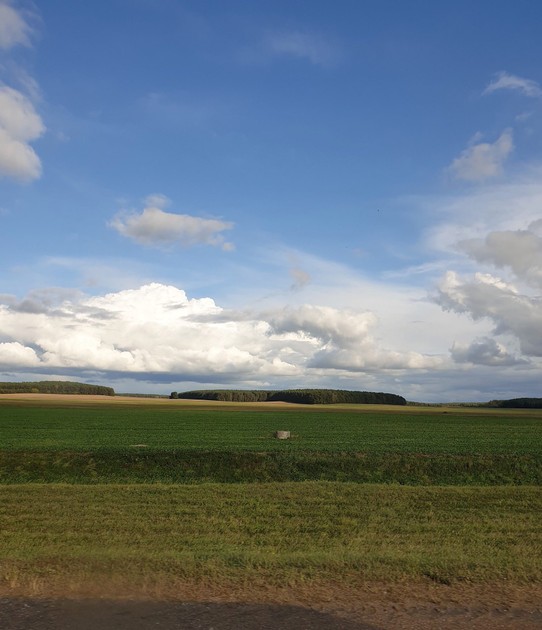 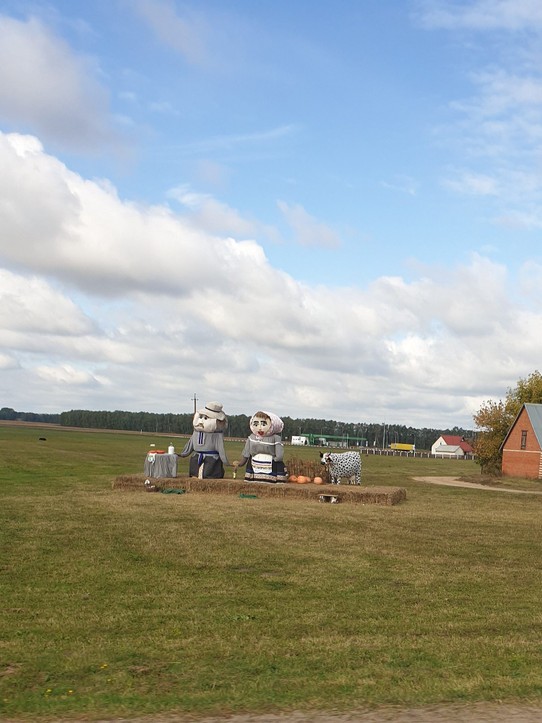 Coming south we had seen a number of these little things, made of hay. 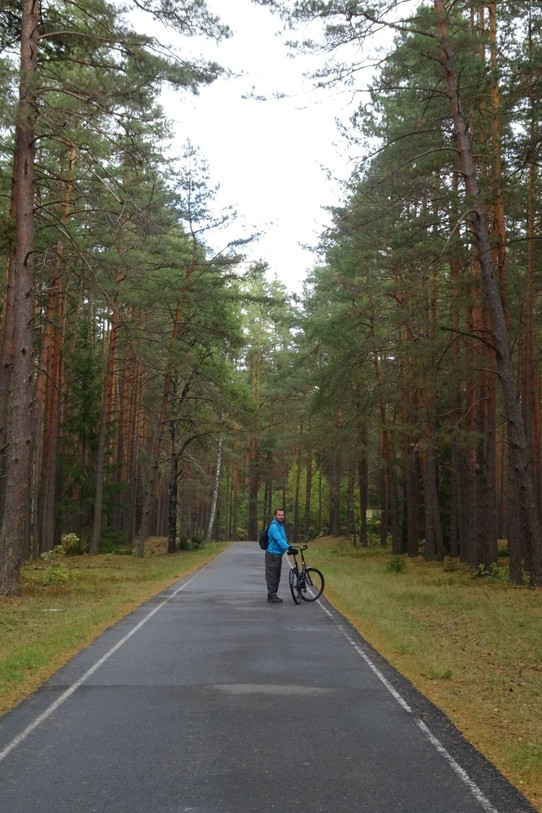 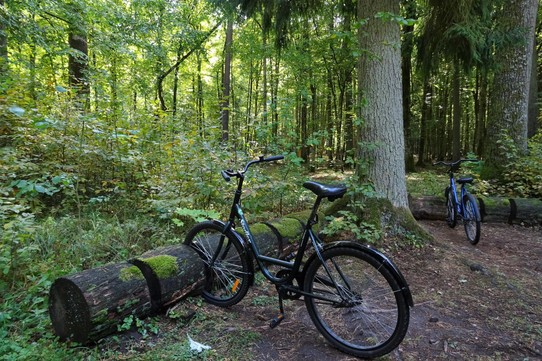 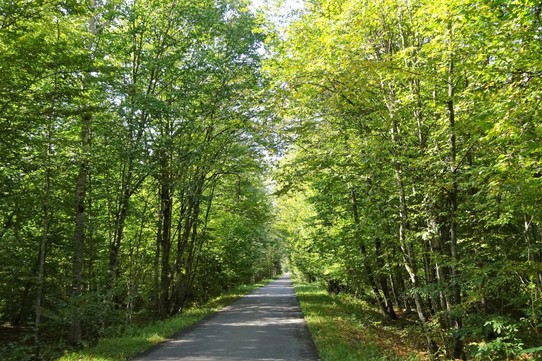 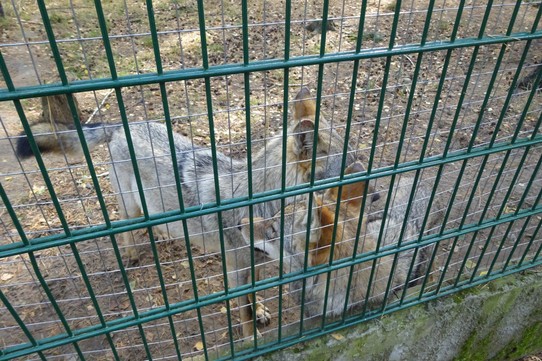 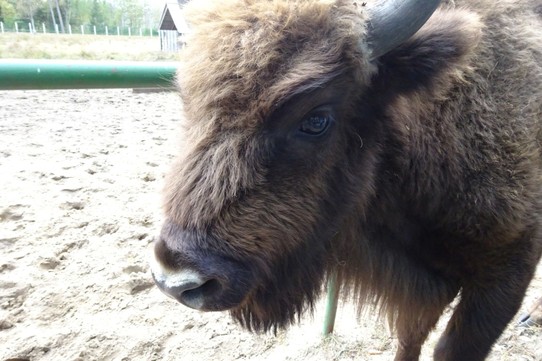 A young bison, before it figured I had no food 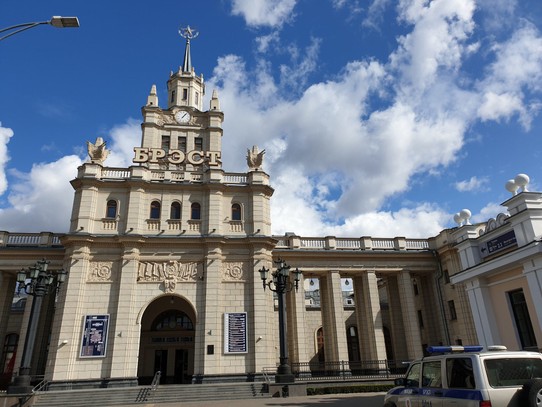