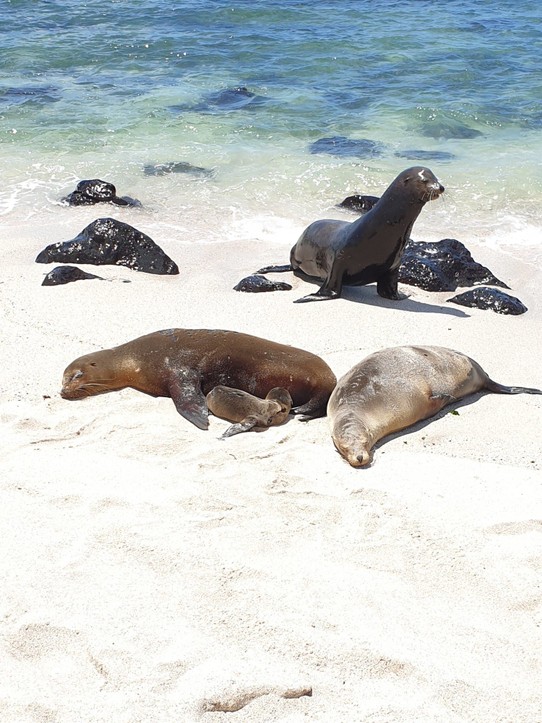 We had decided to stay on San Cristobal, a south eastern island in the Galapagos for three nights before the cruise, so caught the plane directly there. We were mainly there to dive, and had booked in four dives.

One of the famous dives is called Kicker Rock. Unfortunately we didn't get to dive it. Instead we dived Darwin Bay, and Caragua wreck. A German WWI transport ship that sunk off the marina in the 1930s. There were lots of fish! A few turtles, but no sharks. The water was cold (Sydney temp) and I wished I had a hood and gloves. We did have a boat and dive master all to ourselves on the first day which was nice.

The next day we dived Punta Pitt on the opposite and of the island from the town. Thankfully we had hoods on these dives. We saw lots of fish and a couple of turtles. No sharks. They were nice relaxing dives. Apparently it is one of the top dive sites, not quite sure why.

In the afternoon, we went for a walk and looked for red-footed boobies, this is the only place to see them (on our itinerary). We saw quite a few. Glad we did the walk as we saw things that are endemic to San Cristobal and we wouldn't see on the remainder of our time in the Galapagos.

We had 3 other dive mates on the trip to Punta Pitt, a couple of Americans guys and a Dutch girl who was going to be volunteering at a vet on Isabela. We had dinner with her and a German bloke who we think was keen on her...

Puerto Baquerizo Moreno (the main town on San Cristobal) is a small-ish town dedicated to tourism, despite this, it is quite a sleepy town. All the shops were either tour organisers, dive shops, restaurants, or places that did laundry.

We had good burgers, and made friends with the local bakery for breakfast. Only on the last day did we find a really nice (and reasonably priced) place which served nice fish and salads, which even had a sea lion on a chair.

The best thing about San Cristobal were the sea lions (hence the alternative name of this post). They were everywhere. Lounging on benches, on the pier, in the streets, on the beaches, in boats in the harbour, and even in the cafes. They didn't care a jot about the humans wandering around. The locals didn't really seem to be interested, but tourists (like us) were utterly enchanted. I could have watched them for hours. There were even young pups with and without their mothers. So very very cute. It was hard to remember that they are wild animals, I just wanted to give them a scratch behind the ears, like your would a dog.

On the last, non-diving day, we went for a wander around the "Galapagos Interpretation Centre" which gives a run down on the islands, their history and the environmental challenges they face.

The centre also leads to walks to a beach filled with Sea-lions, Darwin Bay and Frigate Bird Hill, where we would get a nice view over the town and up the coast. The plant life is really interesting, at the moment it is the dry season so all the trees look dead, however they are just waiting for the wet season where the island will be transformed and all the trees will be green.

I wish we had and additional day on San Cristobal, to go up to the highlands, as we haven't (and are unlikely to) see any of the forested areas on the Galapagos.

We would be catching a ferry (well a boat) to Santa Cruz to pick up our cruise. 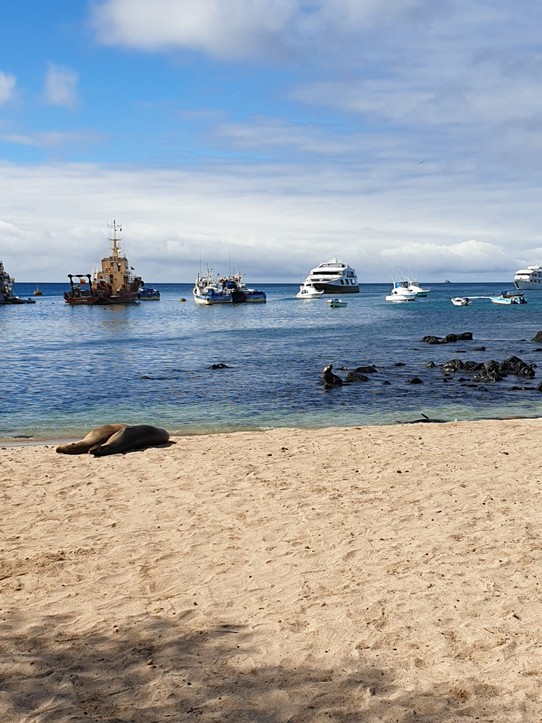 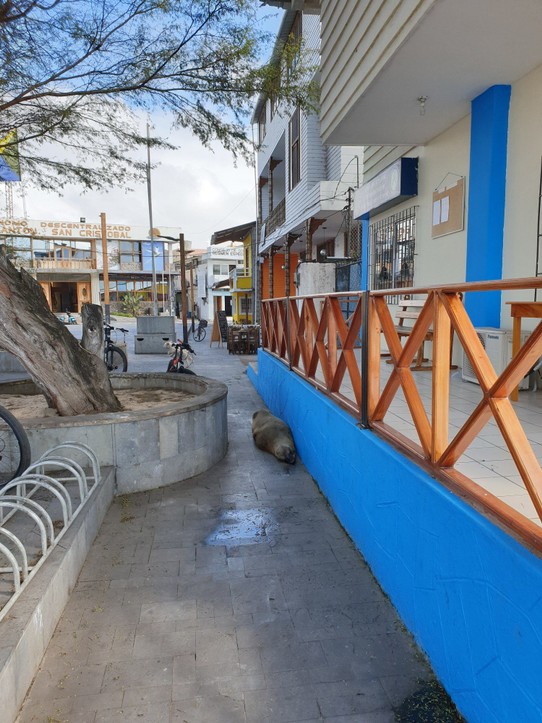 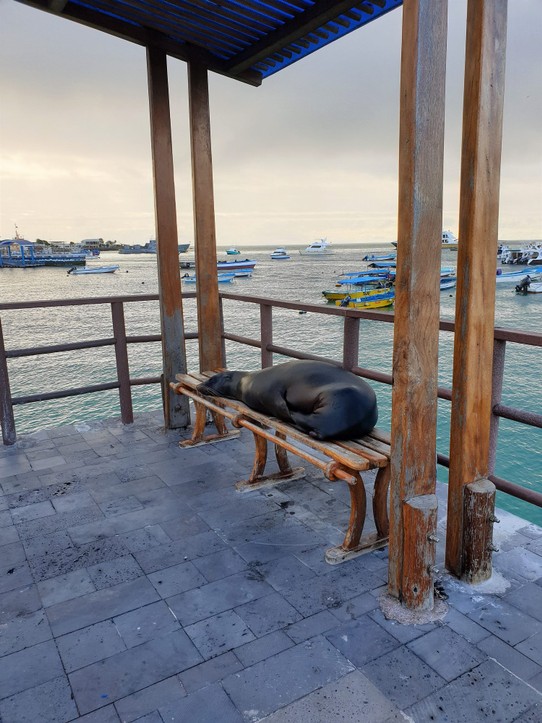 Sea lion on bench on the pier 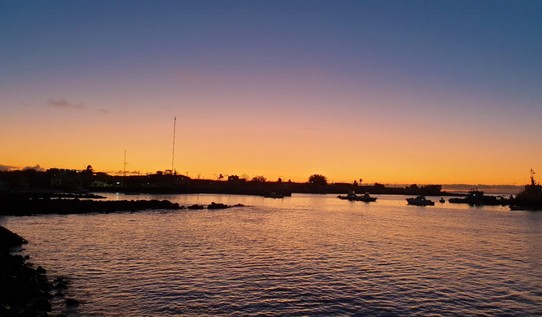 Sunset over the harbour 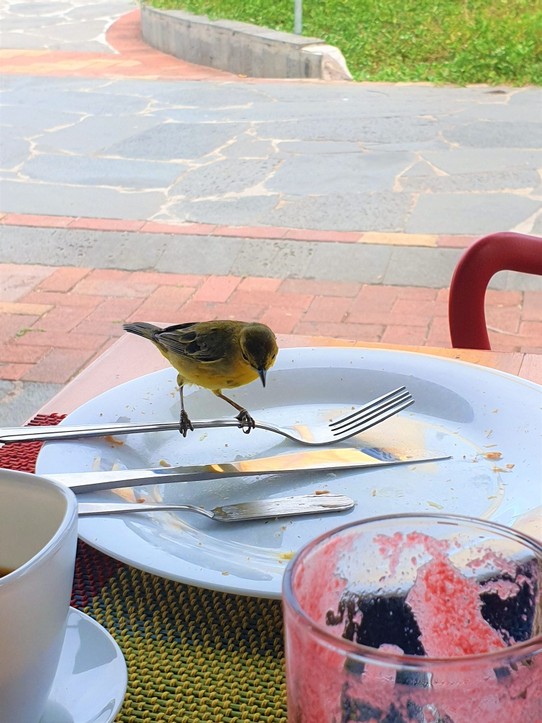 A Yellow Warbler joined us for breakfast 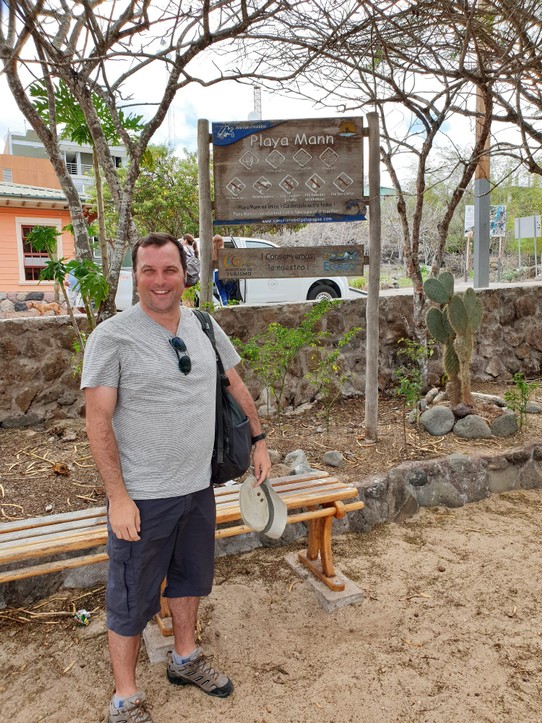 Luke at his beach (Playa Mann) 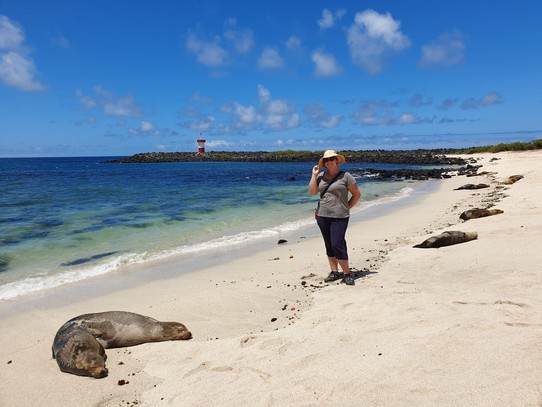 Me with sea lions 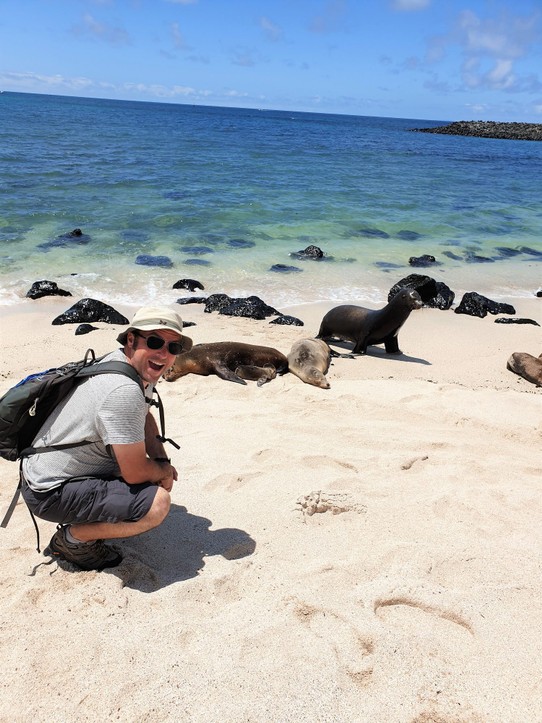 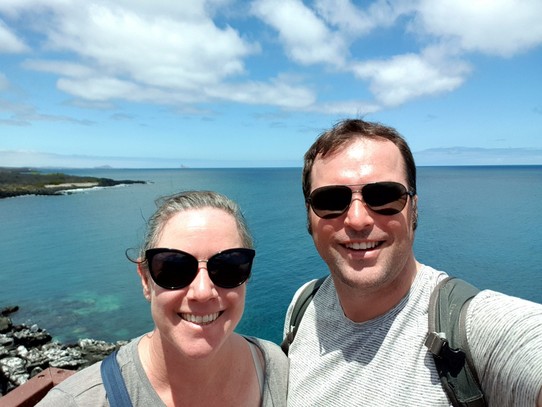 Us at Darwin Bay 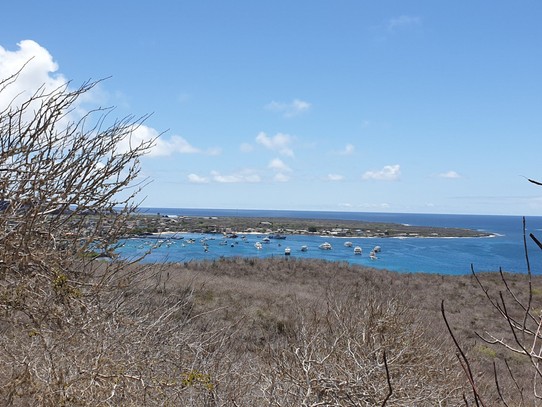 View from Frigate Bird Hill back towards town 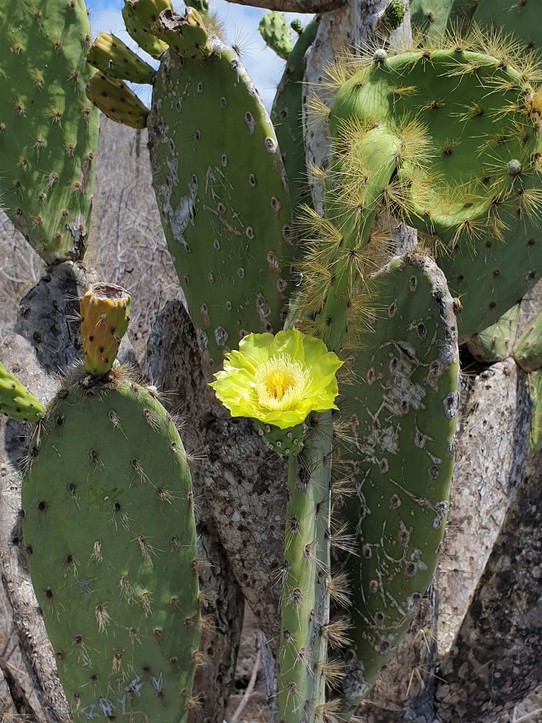 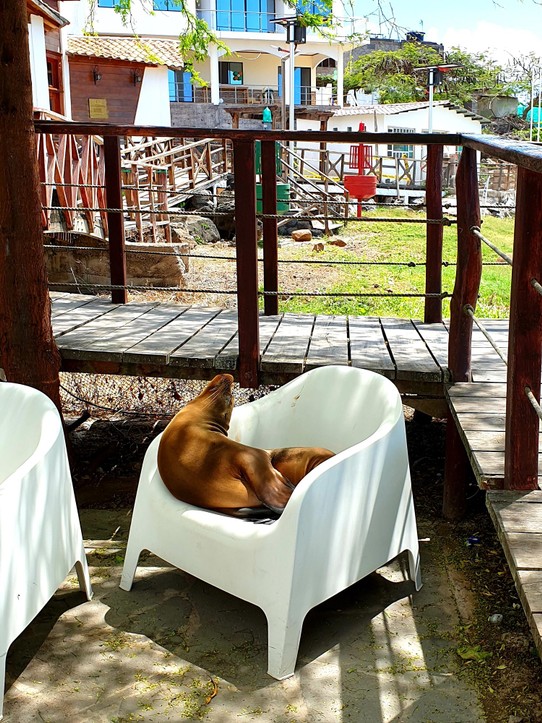 Sea lion on chair at a cafe 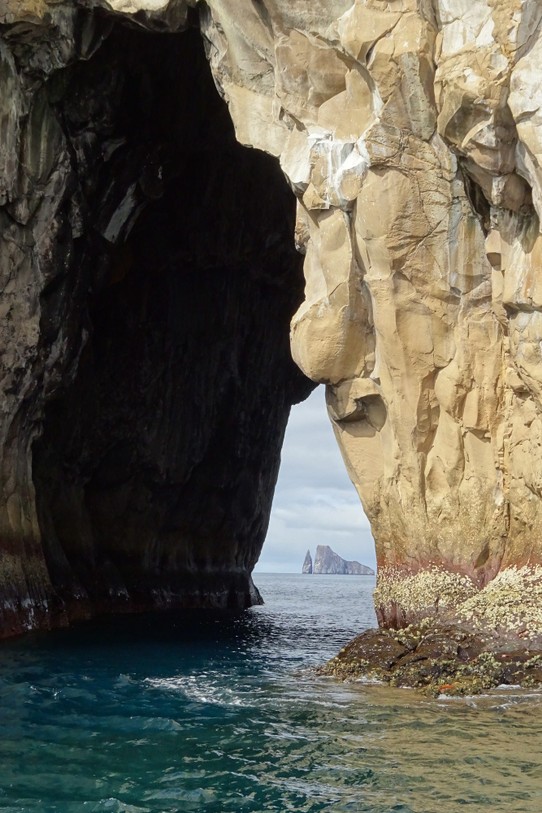 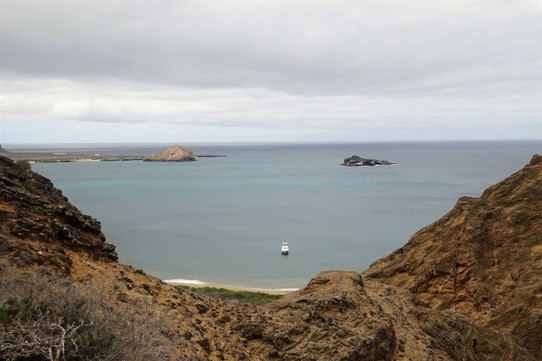 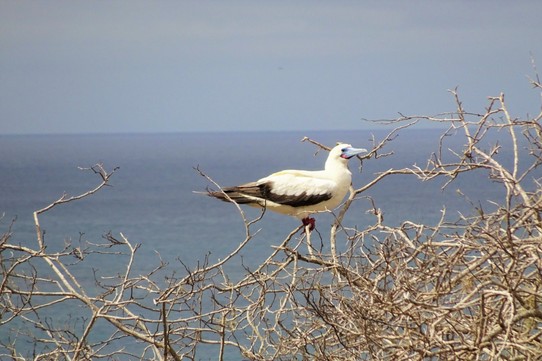 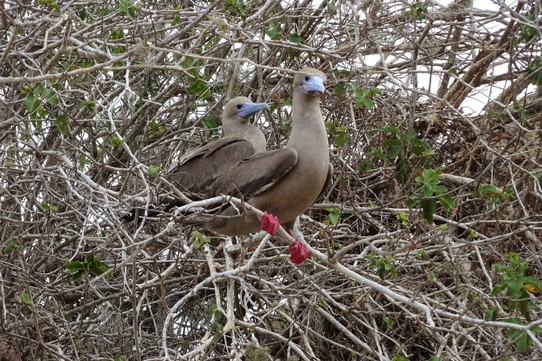 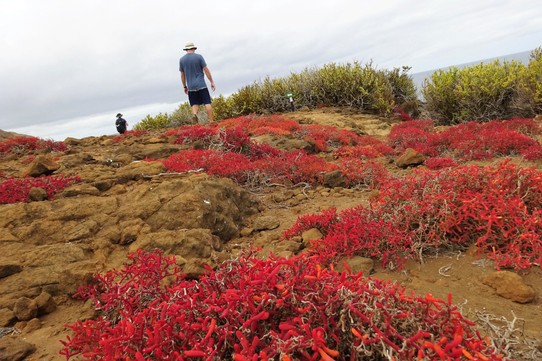 Succulent plants which go red in the dry season 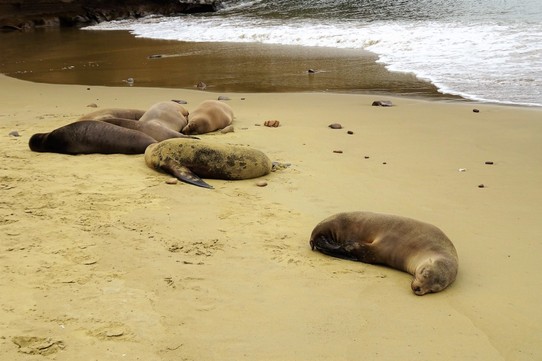