The cruise around the Galapagos 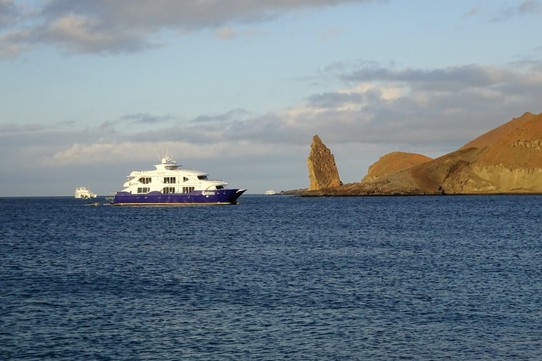 The Endemic (our boat)
Or perhaps this should be known as "How many photos of penguins, sea lions, pelicans, iguanas, fish, turtles... are too many".

That being said, I am going to put the pictures from the different islands on different pages, too many photos!

We spent a lot of money on a cruise on a very nice catamaran (which I hoped would be more stable).

We had one night in Santa Cruz, and to be honest, I wasn't really a fan. Where as San Cristobal was a bit sleepy and ramshackle, Santa Cruz felt tacky. So many tour operators and restaurants but busy with it, and kind of garish. Hard to explain. However, we were only there to meet our boat.

After one night at a disappointing hostel (but we did have nice pizza for dinner) we caught a taxi across the island to get a ferry and bus to the airport.

Going across the island was very interesting as there were a load of giant tortoises just sitting in fields, and one was even wandering down the side of a road. Part of me only expected to see them in special breeding centres or preservation areas, rather than in people's gardens. That being said I was a bit surprised how cultivated the island was, for some reason I didn't think that farming or grazing existed on the islands.

Our boat, the "Endemic" is about 18 months old and beautiful. The cabin is huge. Far bigger and a lot nicer than a lot of the hotel rooms we have been staying in.

We get fed and watered a lot, there are snacks out at all times.

There are 16 people on the boat with us, a group of four Canadians (Bob, Kim, Dave and Jules), a couple from Houston (Ryan and Regis), an old couple from the US (Chady and David - I think we will call David "patient zero"), Marilyn and Don from Maryland, Ramon and Imanole (Basques - not Spanish) and Caroline and Nigel from Perth.

Jules and Kim were fellow sea sickness sufferers. I was so glad that I had the ET pills as they were amazing. If anyone gets sea sick I highly recommend the sea sick pills you get from a compounding chemist in Rockdale known as "ET sea sick pills" after Andrew Ettinghausen. They worked well and didn't make me dopey or sleepy! Anyway, I needed them. We didn't get the smoothest sailing. At night especially (when we took Phenergen) it was really very rocky three nights out of the five. If catermerans are stable, I would have hated to be on a single hulled boat!

It was quite funny as the G Adventures boat "Yolita II" a "tourist class" (3rd class, no I am not a snob, truly) single hulled boat did the same itinerary as us. They were everywhere we were, but when I spoke to someone on the plane off the island, who was on the Yolita, they said that they were always pleased to see the Endemic as at least if they sank we would be there to save them... makes me think their cruise was very rocky. We juat thought that their boat kept getting in our pictures! (see not a snob).

Our cruise visited Santiago (where Mast and Commander filmed some of their scenes), Isabela, Fernandina (where the viral clip of the baby iguana and snakes was filmed) and Rabida.

We were not bored on the boat. There were at least 2 excursions a day (sometimes more) which were either walking, snorkeling, kayaking, zodiac rides etc. Sometimes it was nice to get a couple of hours to just have a snooze or relax.

Everything was included in the boat, that means 2.5mm long wetsuits for snorkeling, flippers, snorkels, hot or cold drinks and a snack each time we came back from an excursion. They even gave us hot bath sheet sized towels when we got back from a swimming activity. We felt very special.

Our naturalist guide Enrique was a good at his job, and took the gentle ribbing about him going out and setting up the wildlife for us to see in the mornings, quite well.

The group got on well, but by the end of dinner each night, people retired to cabins. I freely admit we were in bed most nights by 9.30pm.

It is hard to pick a highlight for the cruise, we saw some amazing stuff. I mean there were so many large sea turtles they became standard viewing, the penguins were interesting and one morning I heard some odd honking outside and went out to find a penguin swimming around the boat. It was great fun to see them zoom past when we were snorkeling.

To be honest, I think the snorkeling we did was far superior in terms of wildlife encounters than the diving we did.

Another high point was snorkeling with sea lions. The first one I encountered gave me such a fright by swimming underneath me, I think the guys on the zodiac 20m away heard the squeak I made. Luke got his own sea lion for a while as one swam next to him for about 5 minutes. When I finally get near it with the camera, it posed nicely, and then blew bubbles at the camera and did a close swim-by. So cool.

Then there was the flightless cormorants who dived among us, and the massive manta ray that popped by, and all the iguanas in piles on the beaches, and the curious pelicans, and the giant tortoises, and the red Sally Lightfoot crabs everywhere and the grumpy Jurassic looking land iguanas. So much!

Fernandia especially was wildlife overload. I think it was everyone's favourite.

On the red beach, on Rabida we saw a day old sea lion pup (so cute) with its mum who had a flesh wound (the guide assured us) from a shark attack. The poor thing looked so uncomfortable. That island also had surprise flamingos. Apparently they are not often there.

Anyway, the only problem with the cruise was the bug that started to go round. The day before the last day David took ill with tummy trouble (euphamism). He put it down to something he ate... I don't think it was. Nor was it "the flu" the hospitality manager said it was. Next struck down was Ramon (one of our Basques) and on the last night David's wife Chady caught it. In quick succession after that (so I hear from the others) Don, Luke and then the four Canadians also caught it and suffered. Three days after the cruise and I think I have a mild case. I hope I am escaping lightly (ed. No I'm not). Such a shame after such a lovely cruise.

Thankfully for Luke we were in one place with a private toilet for three days, and that ciprofloxacin (the broad spectrum antibiotic) is available over the counter in Ecuador. The antibiotics we brought with us weren't cutting it.

Anyway, the Galapagos were beyond amazing. I'm glad we did it near the end of our trip. We didn't get to see hammerhead sharks (Luke's wish), but that was so far outweighed by everything else. I wish we could have stayed longer. 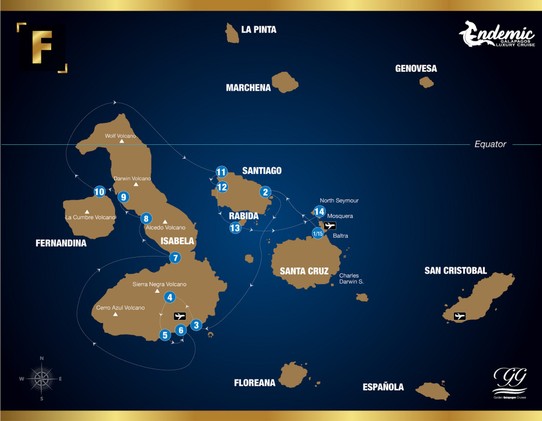 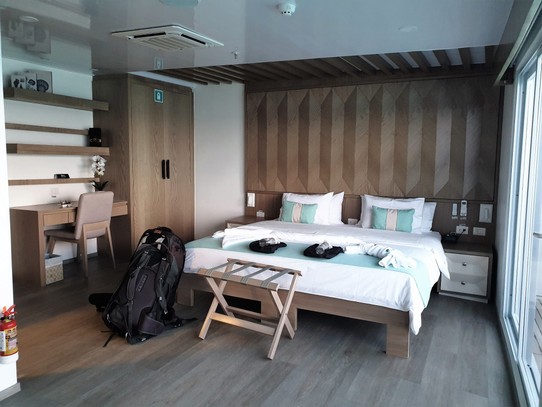 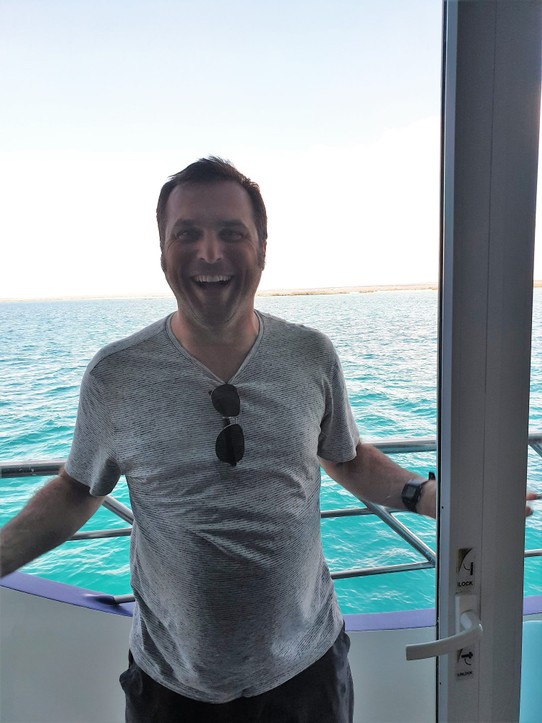 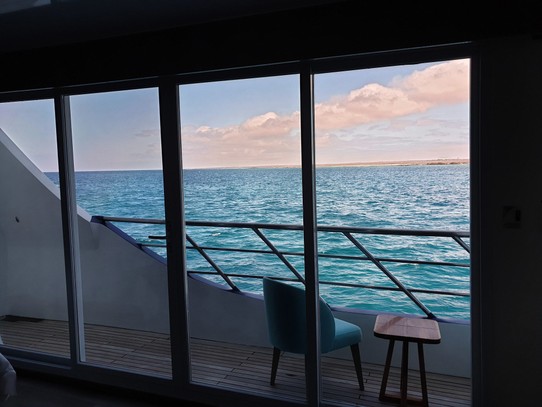 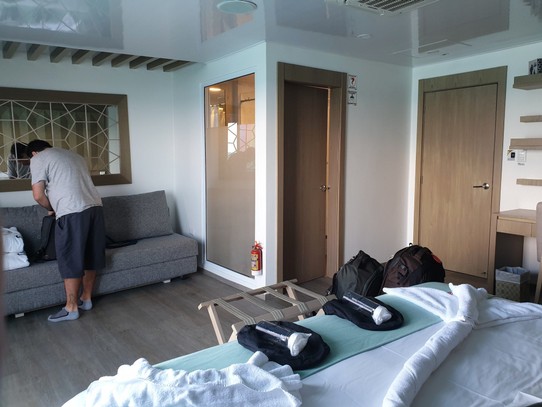 Trying to show the size of the room 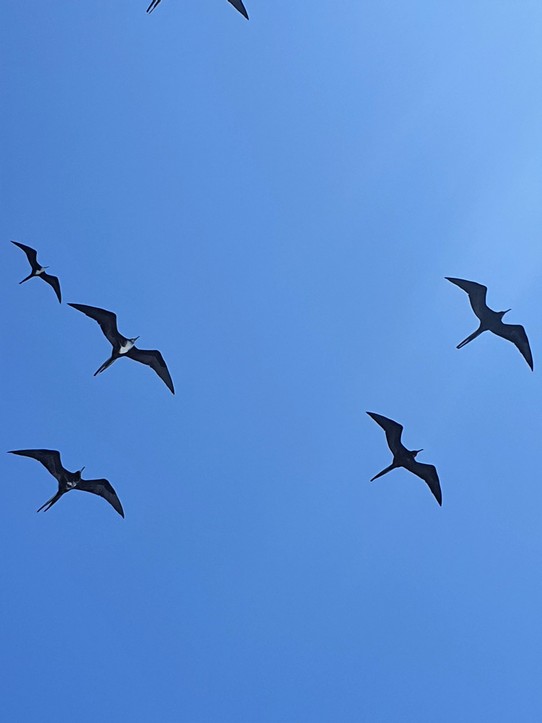 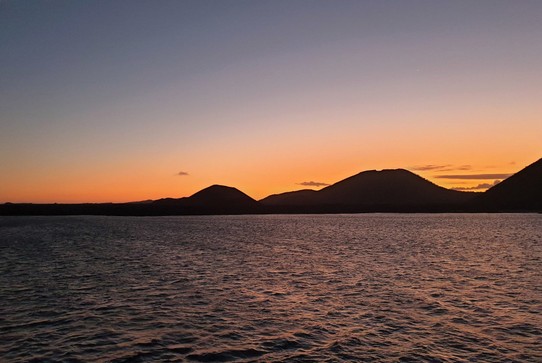