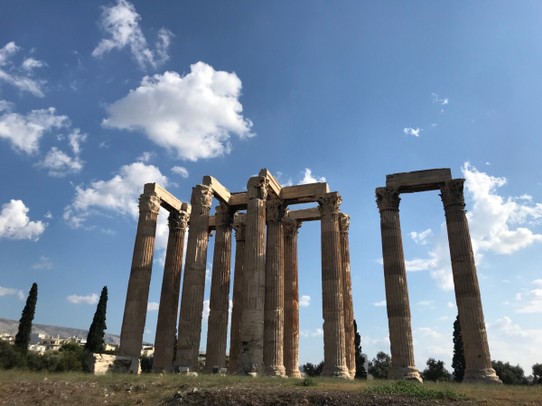 We set our alarm in the morning ready for another airport transfer. This stop we are off to Athens. We got an earlier flight than the others so we could sightsee a little more as we arrive at 2pm due to flight time and a change in the time zone. The others have been to Athens before too.

Matt experienced the worst coffee of his life. The others have a group chat scoring their European coffees. Nicole came up with the name of Coffee 4 Two and it’s been good commentary so far. Anyways, Matt was too engrossed in his review and kept saying we had plenty of time while I pestered on. Eventually we were allowed to leave after he was happy with his review and then we RAN, our flight had last call flashing and when we got to the counter the doors were closed. They weren’t too mad so we quickly hopped on and they shut the doors and started the engines. We then sat on the plane for 30minutes while they cleared the runways. Apparently, according to Matt we could have stayed even later as we weren’t going anywhere.

The flight from Barcelona to Athens was 2hrs 50minutes. It is one of our longer flights so not bad at all. There was a little turbulence but I enjoyed it. Feels like a rollercoaster ride. There weren’t any TVs so I read while Matt napped.

When we landed we shoe tapped at the baggage claim until we got our luggage as we had 8 minutes left to get the train. The ticket line wasn’t moving so I had previously watched a lady choose her tickets on the automated machines in Greek and followed her pattern. We made the train with a minute to spare. It was so busy we stood the 46 minutes for the journey. The airport is only 18km away so their trains are slower than Perth’s. We would have made it in half the time.

Our first sightseeing stop was when we were dragging our bags from the train to the hotel and saw Syntagma Square, once we checked in we headed to the Temple of Olympian Zeus. It was a short walk around the ruins. Construction began in the 6th century BC, but it was not completed until 2nd century AD, 600ish years after the project had begun. During the Roman period the temple included 104 colossal columns. The temple's glory was short-lived, as it fell into disuse after being pillaged in an invasion in the 3rd century AD, a century after its completion. It was never repaired and was reduced to ruins thereafter. It was then extensively quarried for building materials to supply building projects elsewhere in the city. Despite this, a substantial part of the temple remains today, 16 columns in total.

On our way back to the hotel before we met up with the others, we went strolling around the Plaka neighborhood and markets. Athens is very cheap compared to the last 5 other cities. After meeting up with the others we went out for some arvo drinks for a whopping price of €1,50 each. We then headed up to Acropolis so we could see the Parthenon.

The Parthenon is a former temple, on the Athenian Acropolis, Greece, dedicated to the goddess Athena, whom the people of Athens considered their patron. Construction began in 447 BC. It only took 9 years to build. Very impressive due to the size of the temple. The Greek government continue to restore it over the years.

After that we walked back to the hotel and continued to walk the markets into the night.

We went to a recommended restaurant from the taxi driver the others used and everyone was happy with the choice. Greek food is so large and delicious. It’s always a bonus when the give you free appetisers.

We wandered the streets before heading back home to the hotel, to get prepared for our 4am wake up call to head to Santorini.

Athens has been amazing and I highly recommend visiting here, wish we were here for longer than a pitstop. 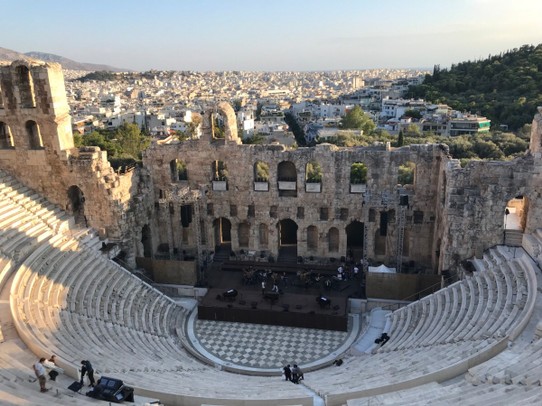 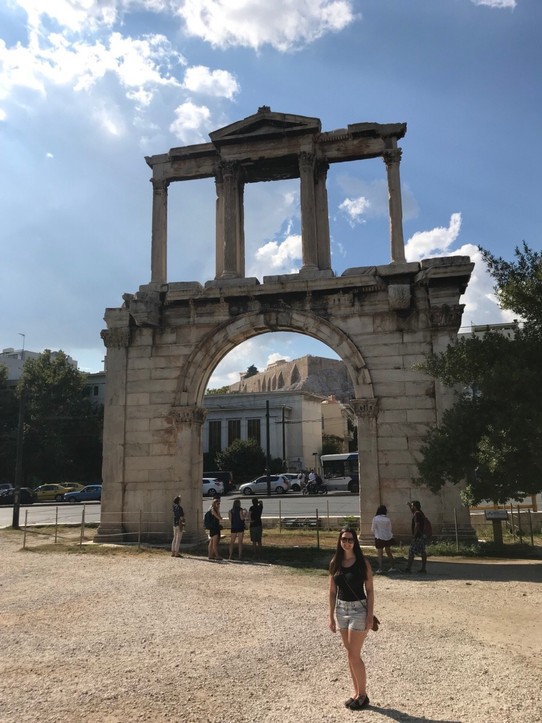 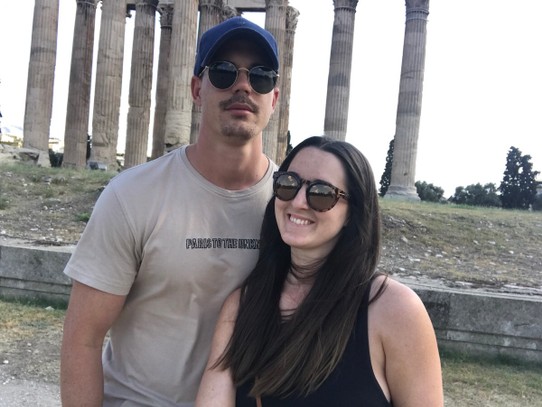 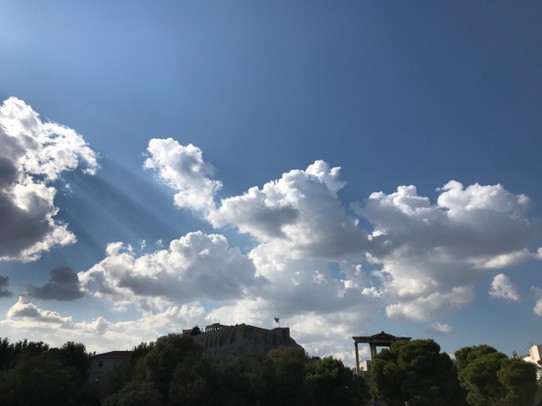 View of Parthenon from Temple of Olympian Zeus 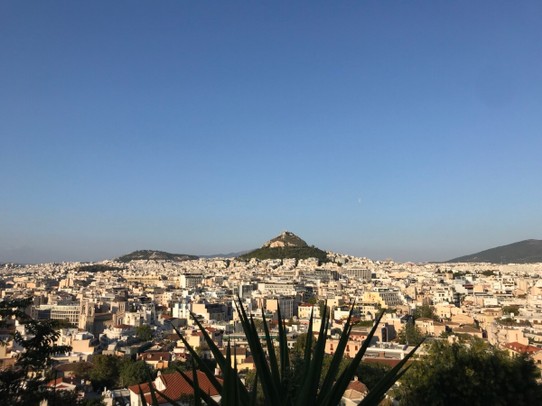 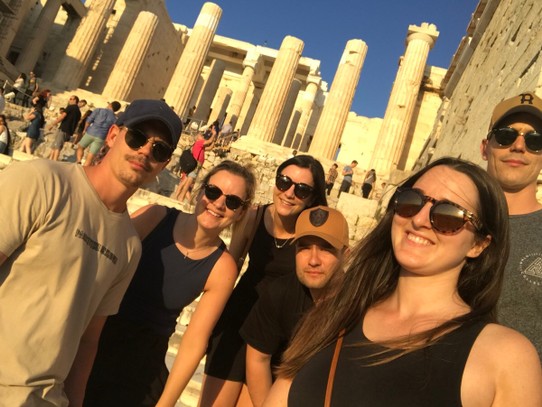 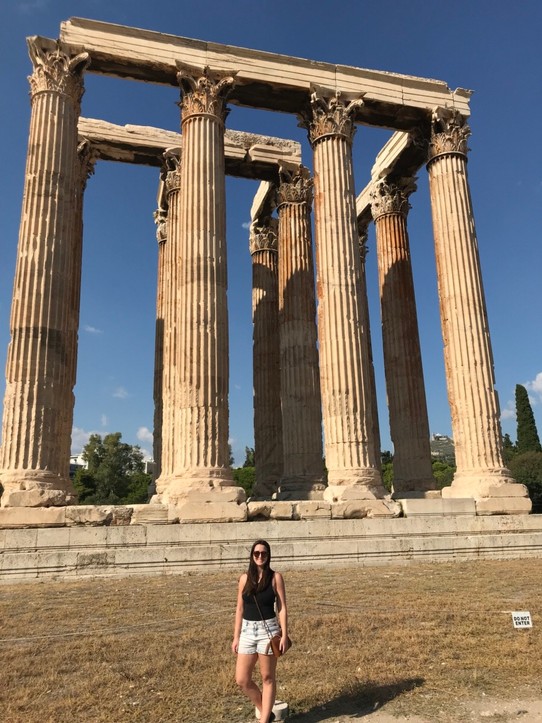 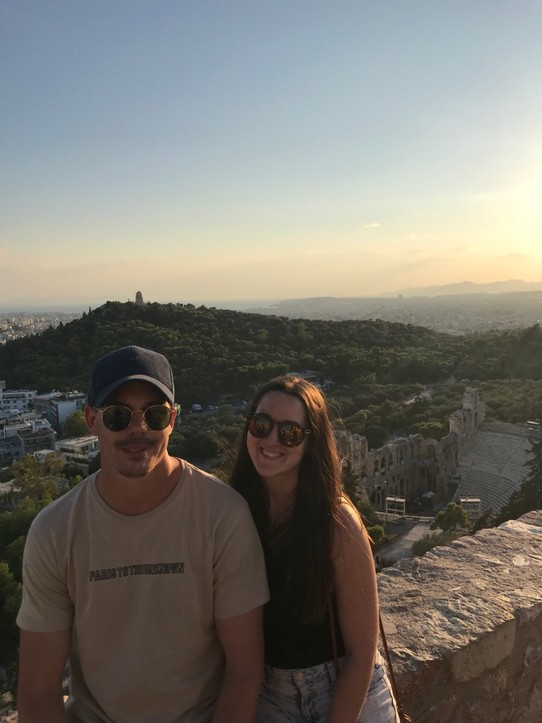 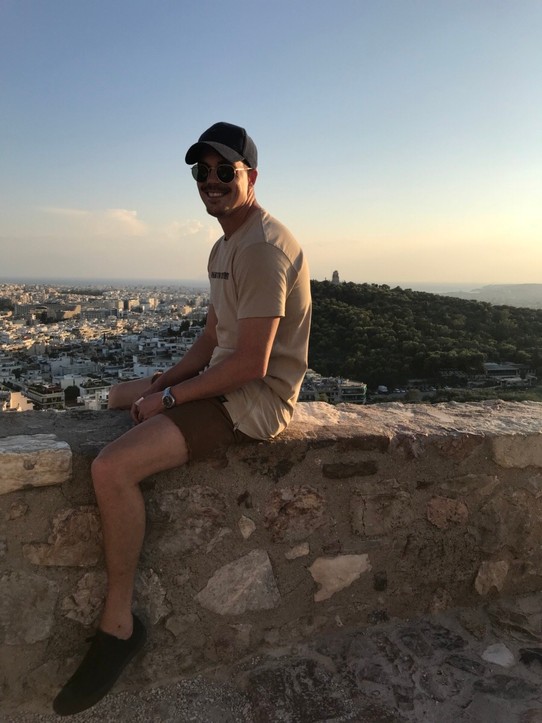 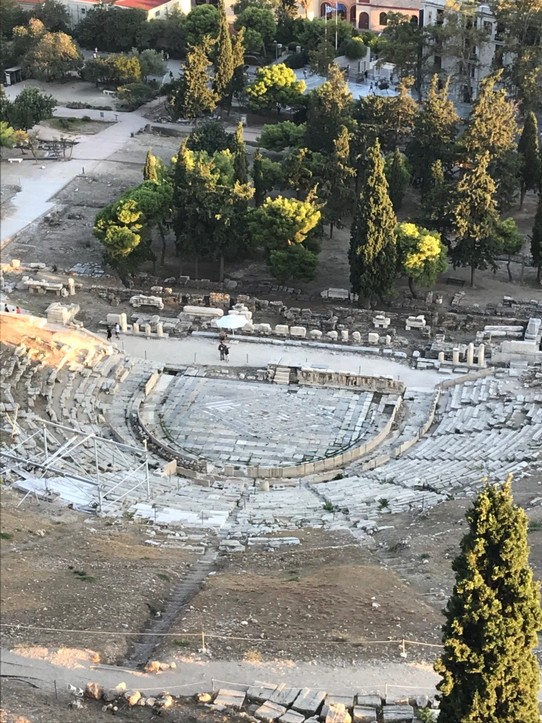 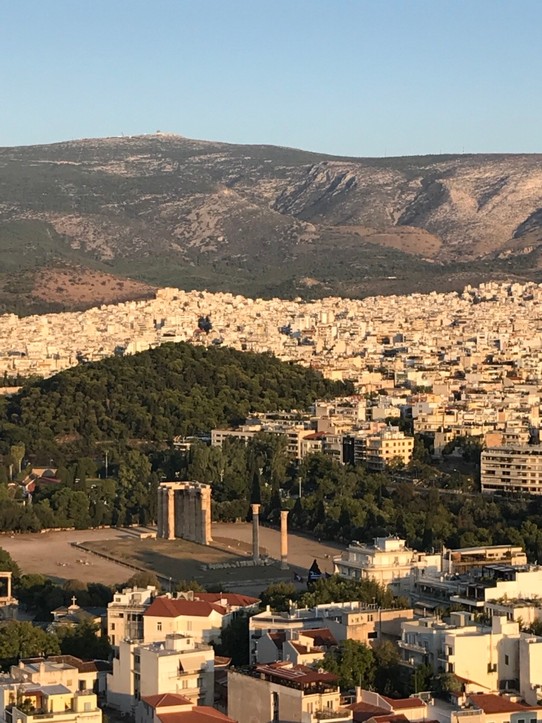 Temple of Olympian Zeus from Acropolis 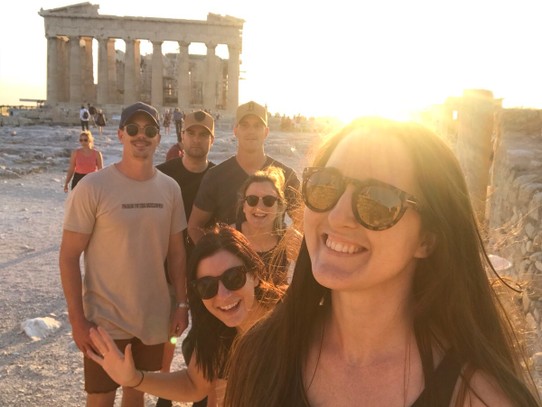 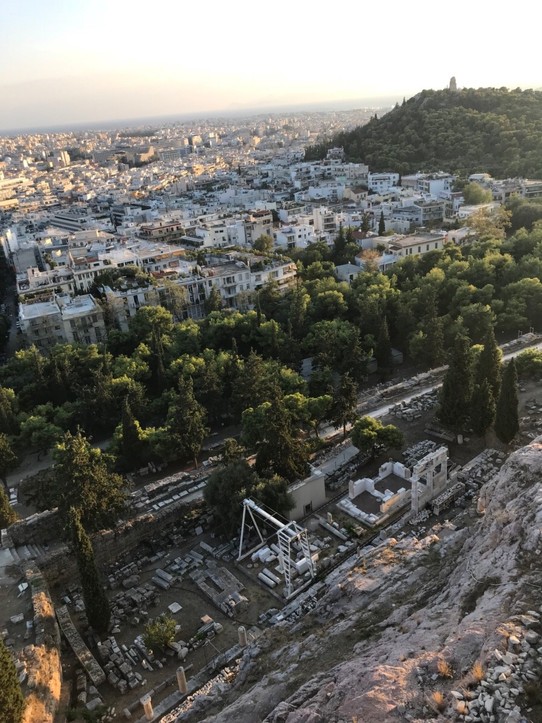 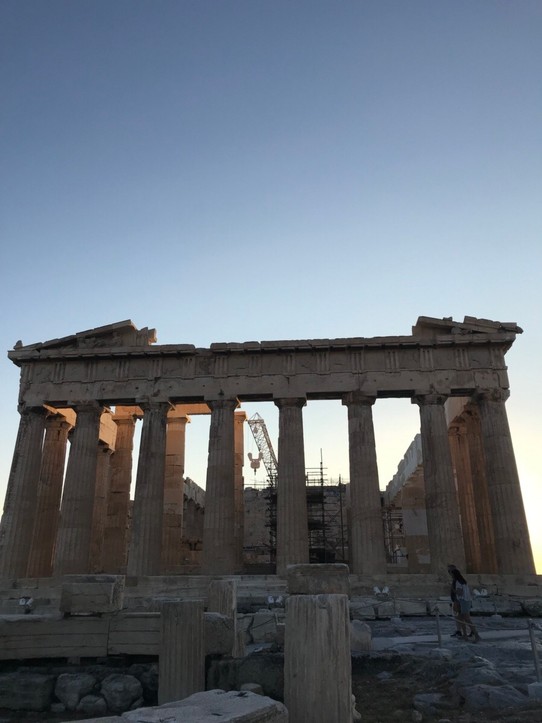 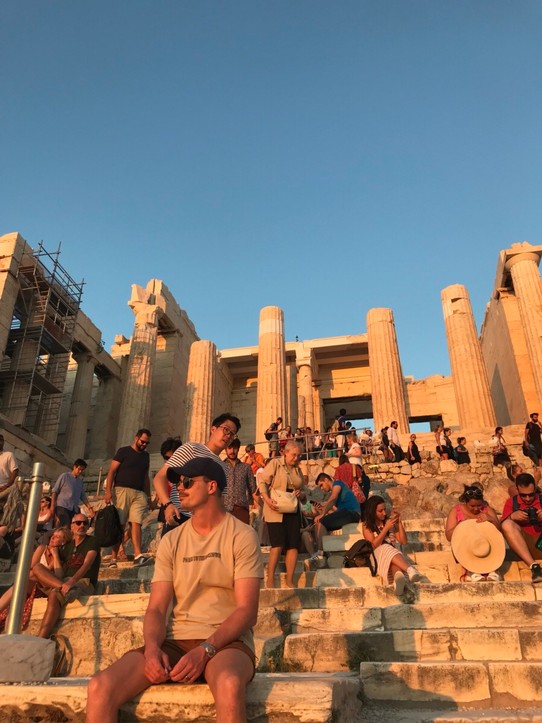 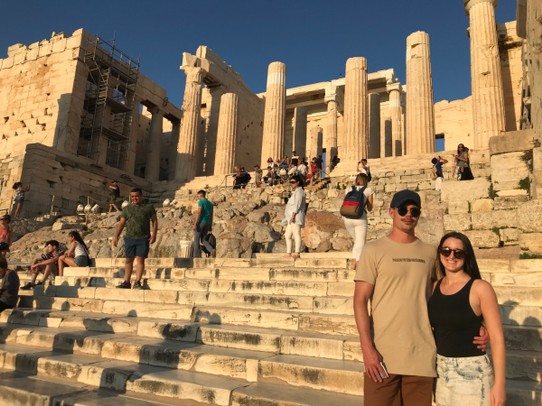 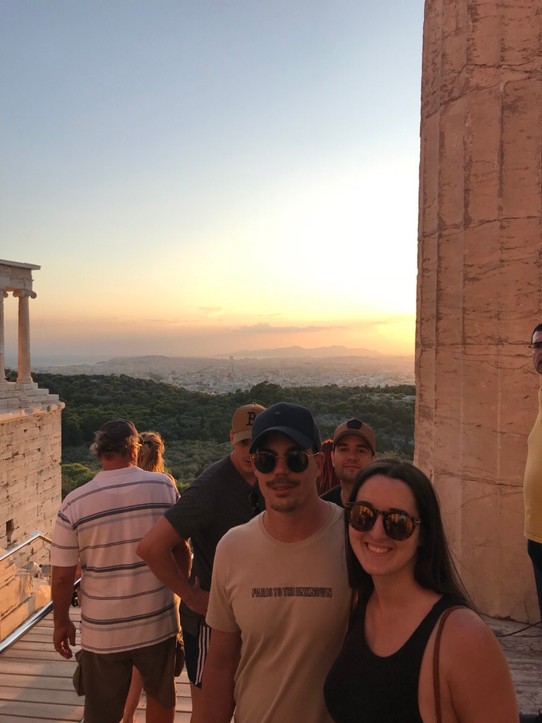 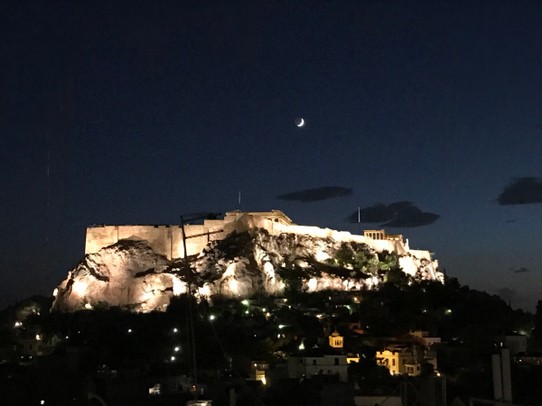 2
View from our hotel bar