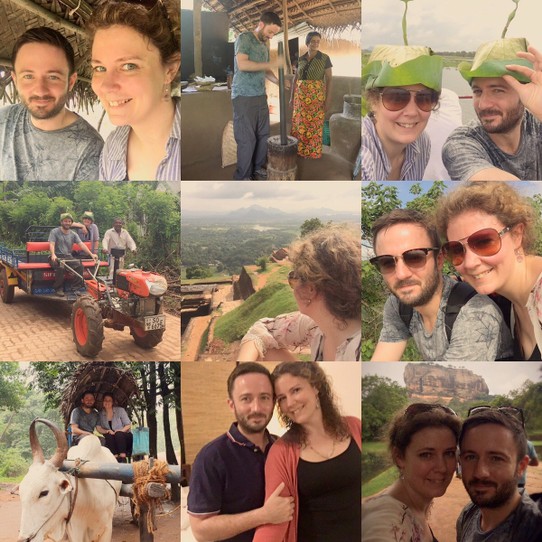 The spices of SriLankan cuisine we t through James like a night on the curry and beer with the lads.... so breakfast was a little more of a delicate affair, but again endless choice, and what was the dessert room was now full of fresh fruit and juices..... quite the turn around!!!

It rained much of the night and during breakfast which added to the dilemma of what to wear on our village tour this morning..... muddy paths, in the jungles, being respectful and the humidity all made this decision for me very difficult and I ended up leaving the room looking like a right wally!! The choice however I feel was correct for the morning!!

Kingsley dropped us at the entrance to the village which seemingly looked like we just were getting abandoned in a random place on the main road!! The rain had stopped. Our guide Kholita met us with another English couple, Tori and Dave from up North. We walked up a water channel eroded, red, dirt track with explanations about new and old properties and how the village hierarchy runs. At the end of the track, we were met by some ancient looking bullock carts.... our trusty steed for the next section!! After some photos we were away. Not holding on was not an option as the cart rocked from side to side dependent on the track and the whim of our bullocks to eat some tasty grass from the sides along the way.... I feared at one point we may end up on our sides in a paddy field, however the capable driver yelled something at them.... kicked one up the bum with a flipflopped foot and the other a guide with a stick and we were back on track!!

We passed paddy fields, families small holdings and elephant watch towers as they like to trample and eat a lot of the village self sufficient crops. We were then guided towards a small home, ran by to older women who gave us a cookery demonstration and cooked us a little food. We scraped coconut and de husked the paddy to get the rice. We were fed a little roti with coconut, lime, onion and chilli concoction .... it had some heat to it, but was delicious!!!

We the took a stroll to the next adventure, with me being the Bambi and ending up on my bum in the mud (how embarrassing!!!) the guy that was captaining the small catamaran that took us out on the reservoir (tank as they call it!!) washed my shoes for me.... so embarrassing!! Our captain made us some snazzy hats from Lilly pads and again we were onto our next transport mode!!

The looked like a tractor front, with 2 wheels, stabilised by the cart/trailer on the back. It was a little bouncy and when we ended up back at the main road. Dave and tori left us there and we continued back into the village for lunch. On our extended section, James was allowed to drive the beast... still wearing his Peter Pan hat!! His account of it being ‘bloody hard work’ both to steer and deal with the vibrations from the engine.

Lunch was delicious, much milder than the curries in the hotel.... about 8 different things to try, out of a banana leaf lined palm bowl. Cooked by a mother and daughter.

We met Kingsley back at the main road, where I made the request to go back to the hotel and get changed out of my muddied trousers. Before heading back out to the lion rock.... Sri Lanka’s most famed attraction.

It was a 30 min drive away from the hotel but the view of Sigiriya most of the way. We were taken into the tourist entrance by Kingsley, who guided us through the museum. A king who had murdered his father built his own palace on top of this big ass rock so not to be surprise attacked by many of the people who hated him!! Now when I say big ass rock I mean a 660ft of straight up!!

The museum showed lots of diagrams of what the palace was once like, the paintings on the side of the rock face with their breasts out to make the king happy (Kingsley said teats, breasts and tits far too many times in the space of 5mins spent explaining this to us!!!) it was raining when we left the museum, so with boil in the bag rain jackets on we set off on the 1/2 km walk to the bottom of the rock.

We couldn’t bare the jackets on so resigned our selves to being cooler but soggy. Abt 10seconds after this decision, someone turned off the tap and all was sunny and bright (and steamy!!!)

The first section of stairs was completed just about in one go, with a water break and photo stop at the top!! It was then a set of spiral staircases up and down to where the actual cave paintings of the breasts remained, protected from the last 1500 years of monsoon rains. It is thought the whole rock was similarly decorated!! Back down the other stairs to continue up. Our next plateau was the lion steps where it is thought 2 giant lions once stood, where now only the paws remain!! We had another break here as we were both feeling the effects of a broken nights sleep, the heat and lack of a carb lunch.

The last push to the top was steep.... so many stairs but we made it, following a slightly slower lady meant there was no pressure to bolt up it. The view from the top was most definitely worth it, with spectacular panoramas across the surrounding jungle. So nice to see such an expanse of untouched forest after the palm oil horrors in Borneo.

After a million photos on the summit, we headed back down, the steps at a slow and steady pace... vertigo is not your friend going down, narrow, steep steps. Kingsley had instructed us to follow the tourist path back down, through various other parts of the lower palace, including a 100ft carved cobra in the rock. It was called the tourist route as it took you through all the vendors at the end selling tat even by my standards!!

Once back at the lodge we sat for a bit, snoozing by the pool, but decided a siesta back in the room would be more beneficial. An alarm set so we didn’t miss dinner, we slept well!!

Dinner was yummy, although neither of us went as crazy as the night before..... I only had 5 puddings tonight!! We listened to a band play whilst we ate playing Dolly Parton and Bryan Adams (traditional!!)

Tomorrow morning is a pool morning, with a jungle safari in the afternoon!! Fingers crossed for wild nellies!!! 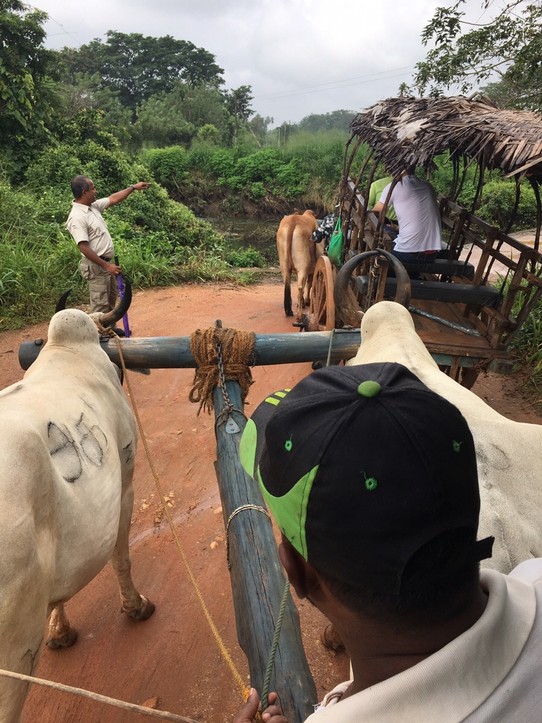 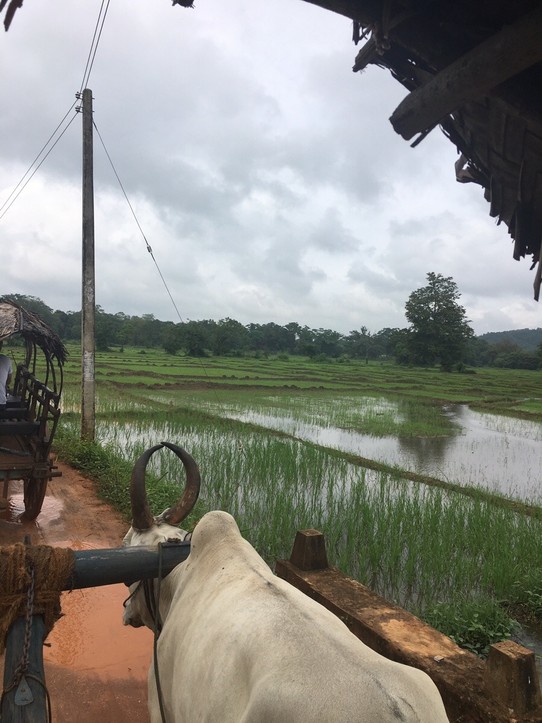 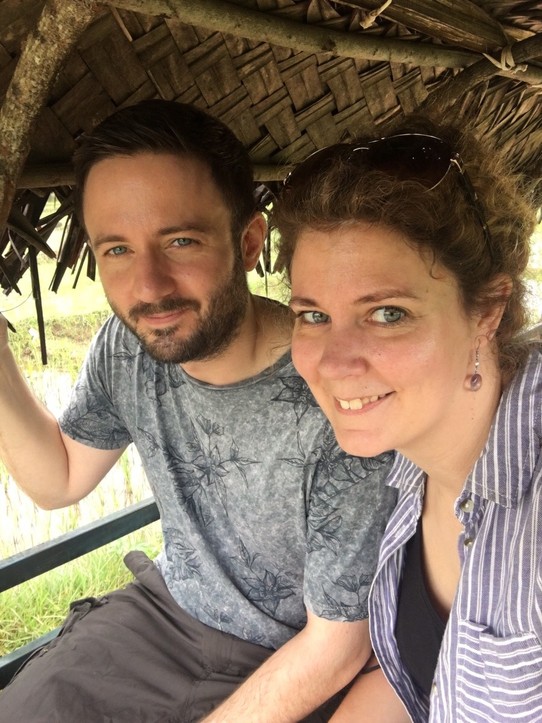 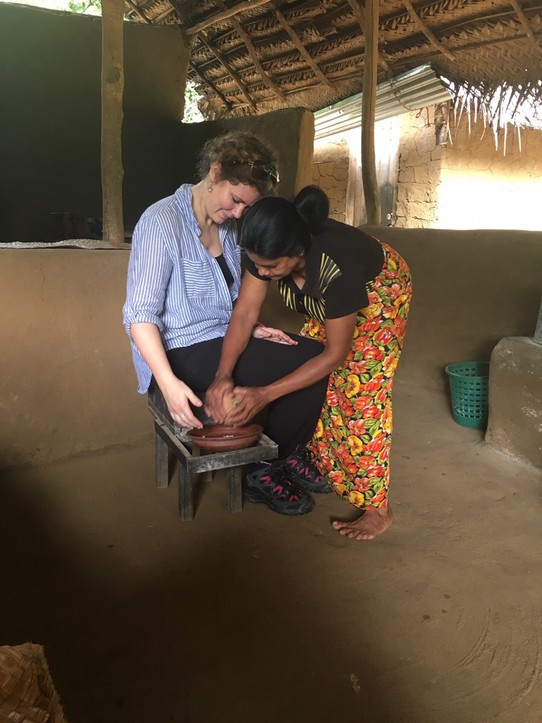 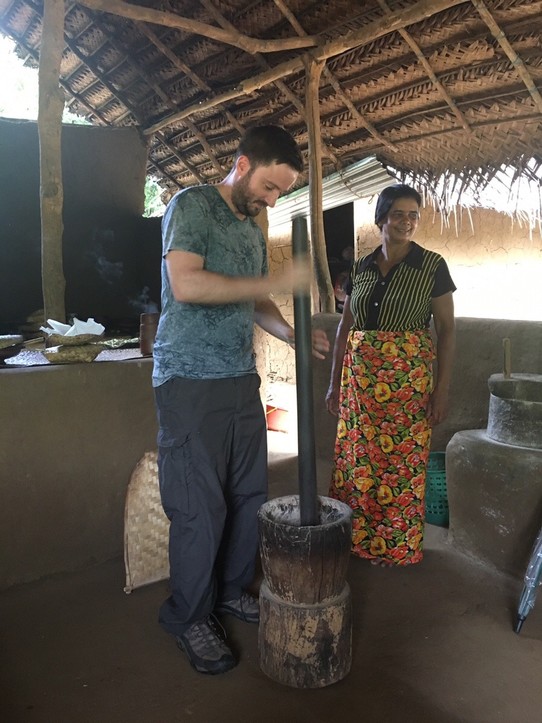 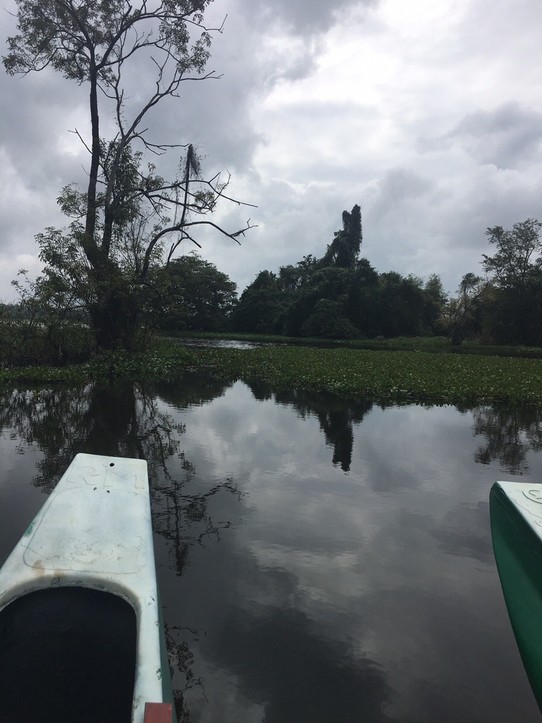 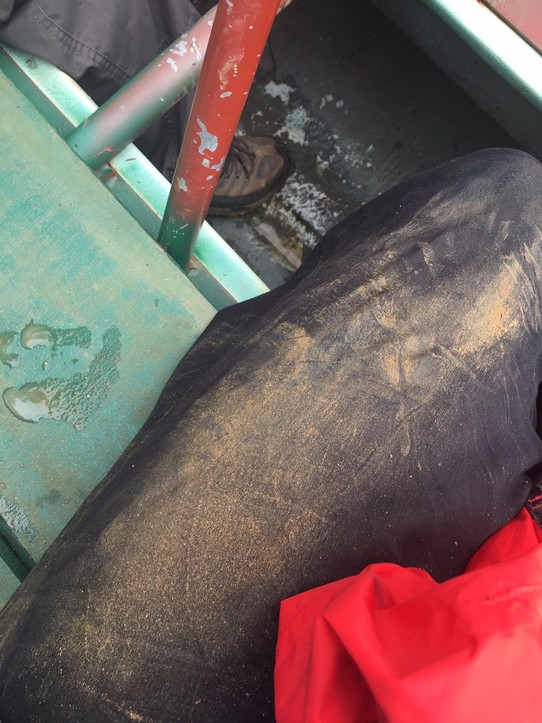 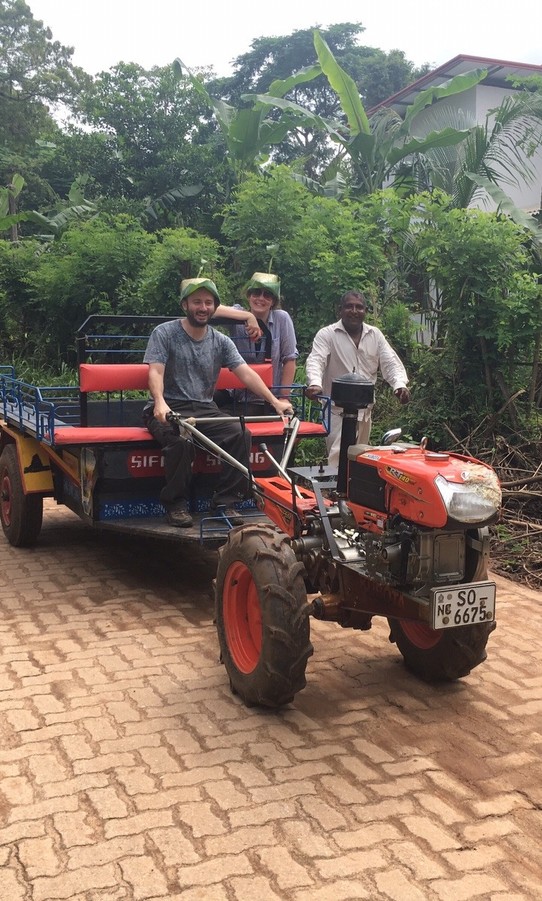 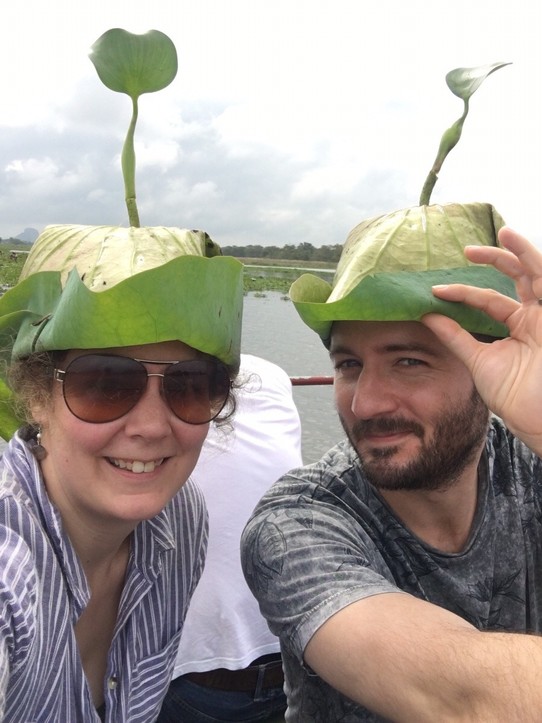 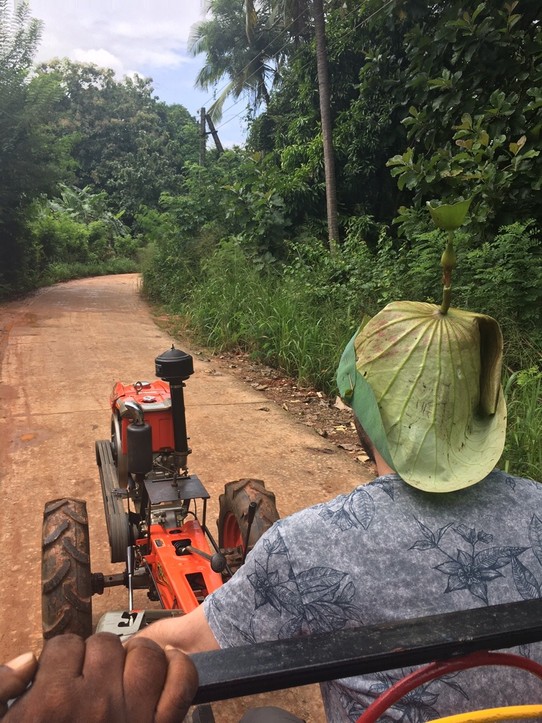 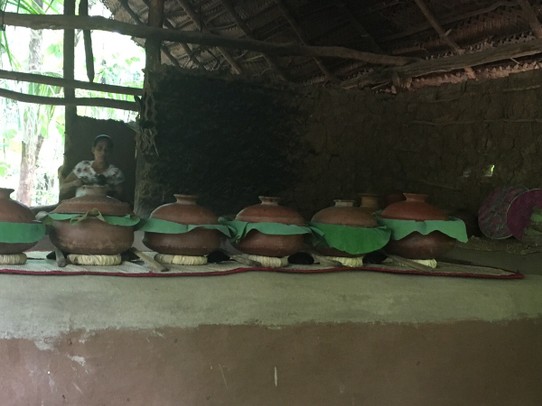 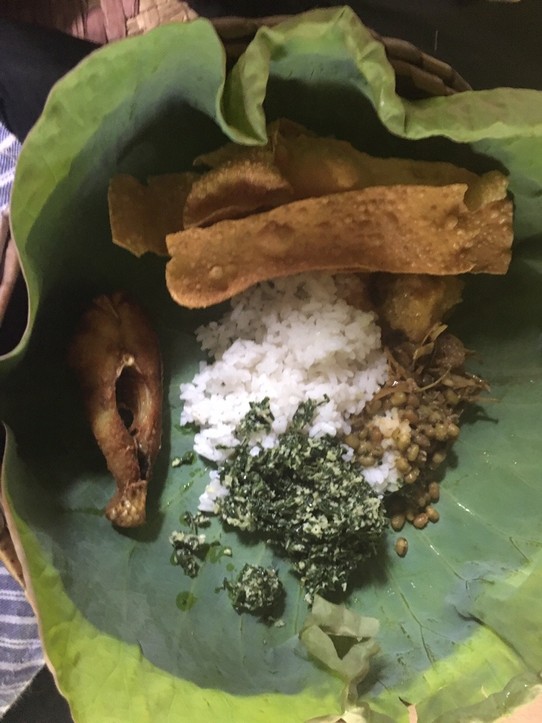 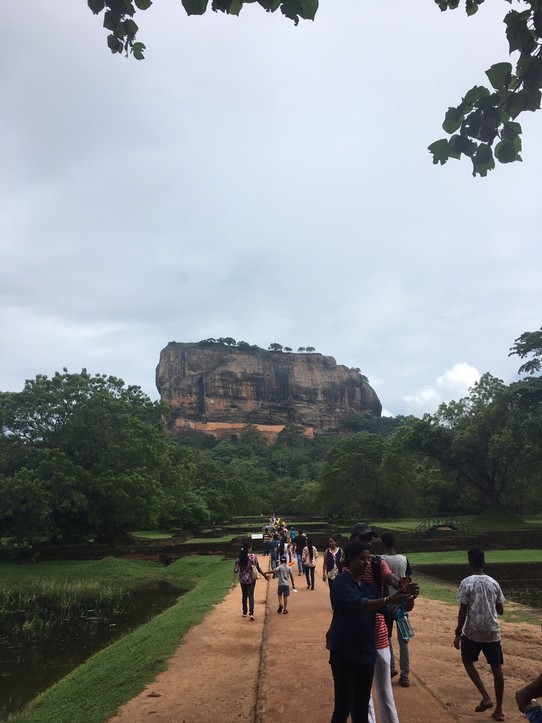 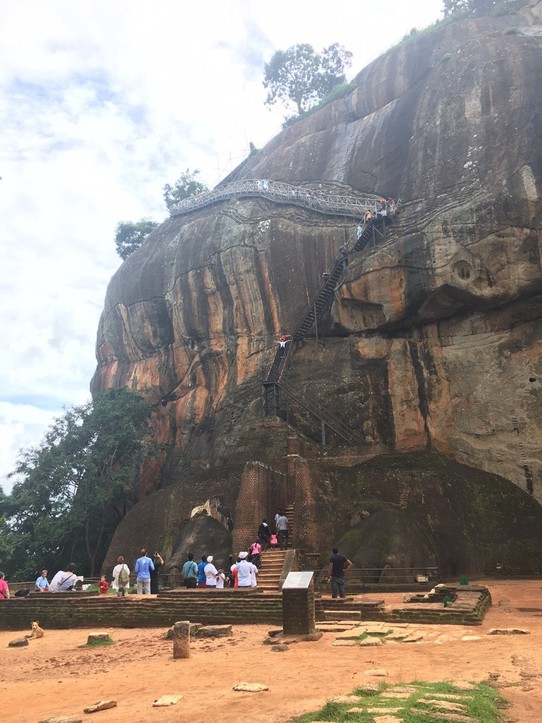 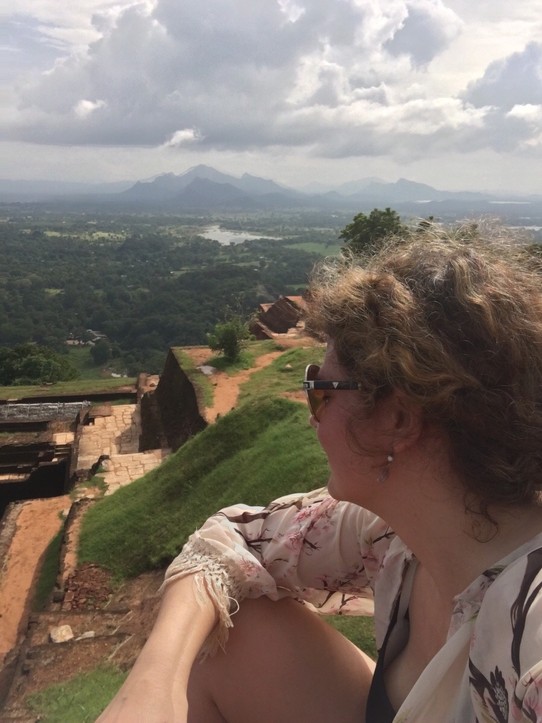 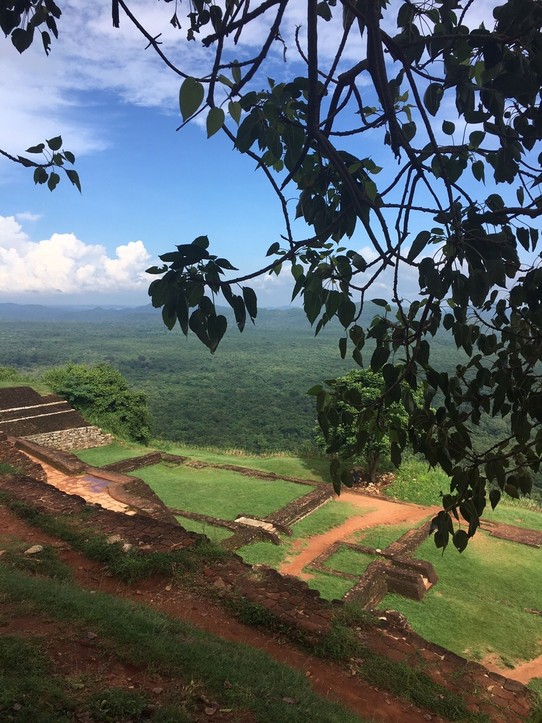 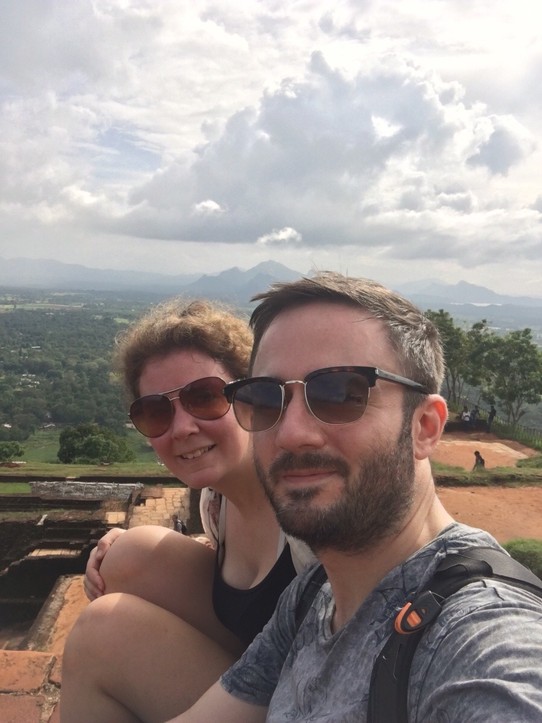 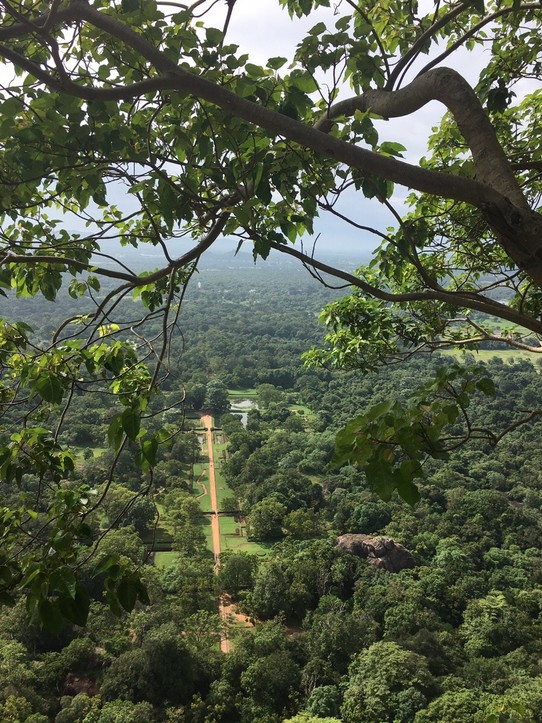 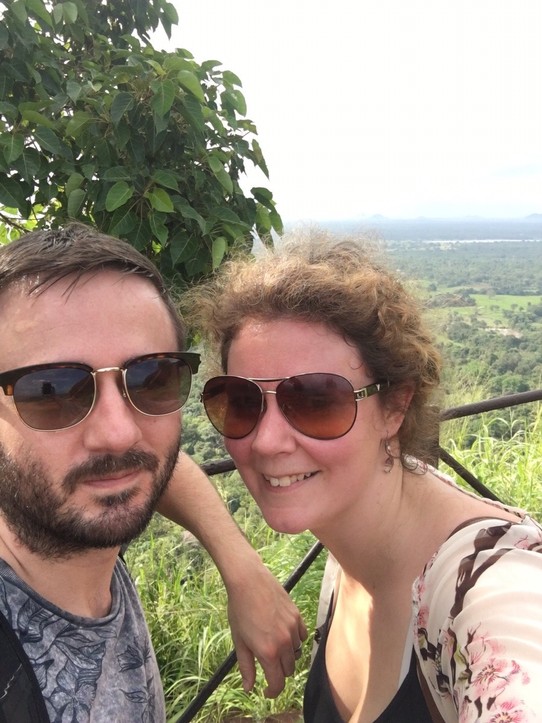 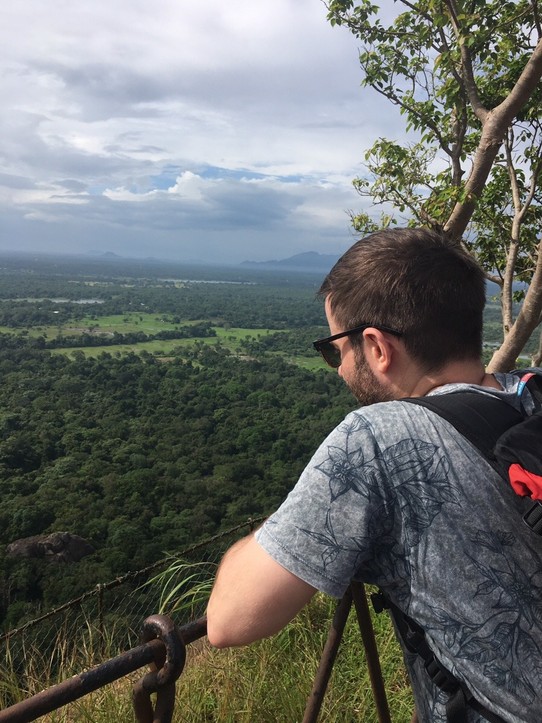 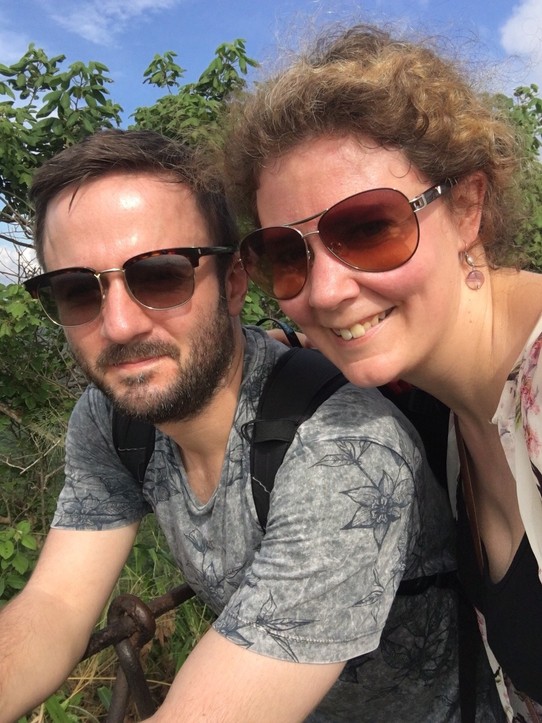 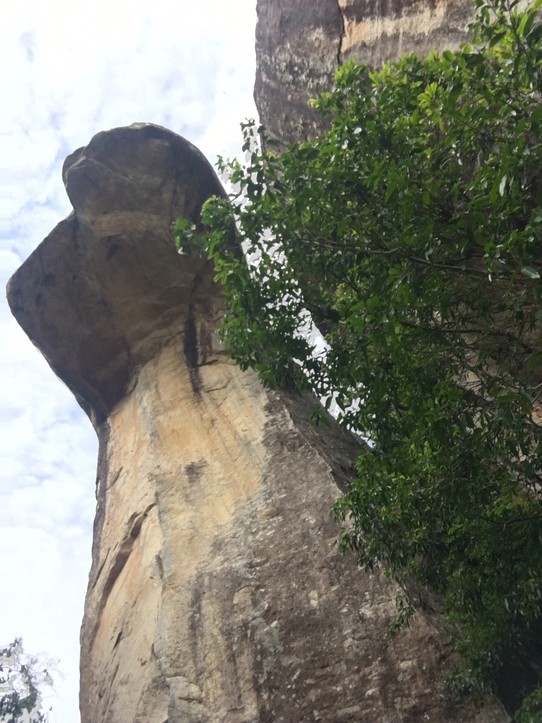 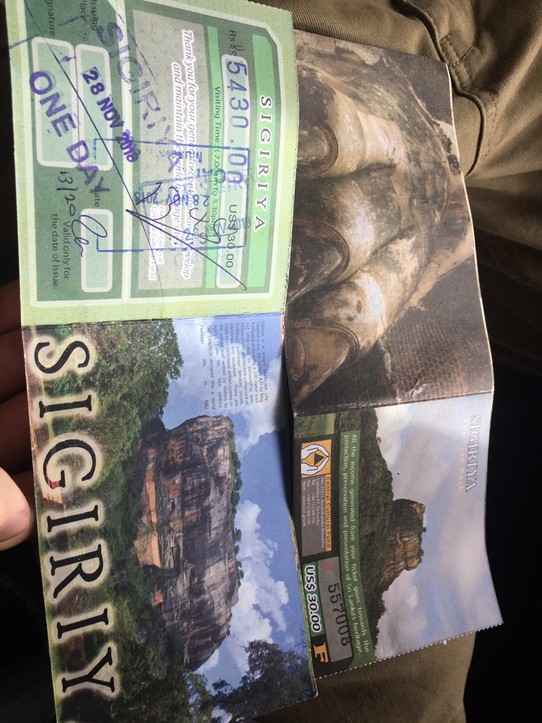 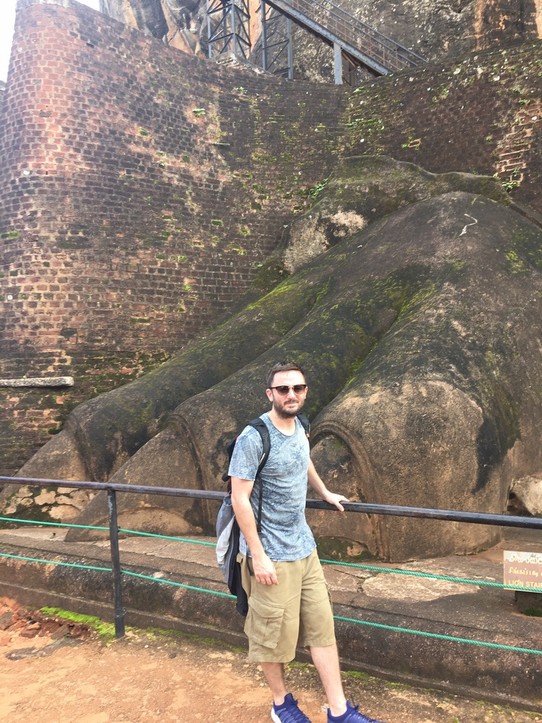 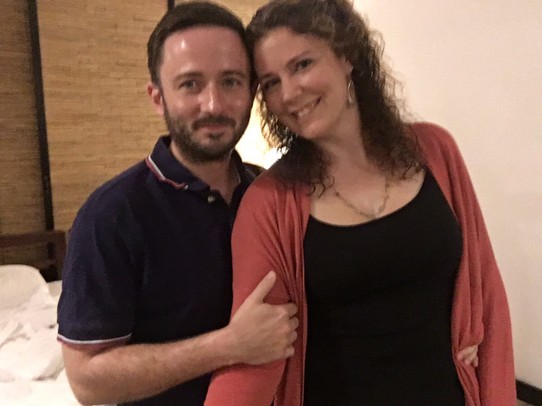 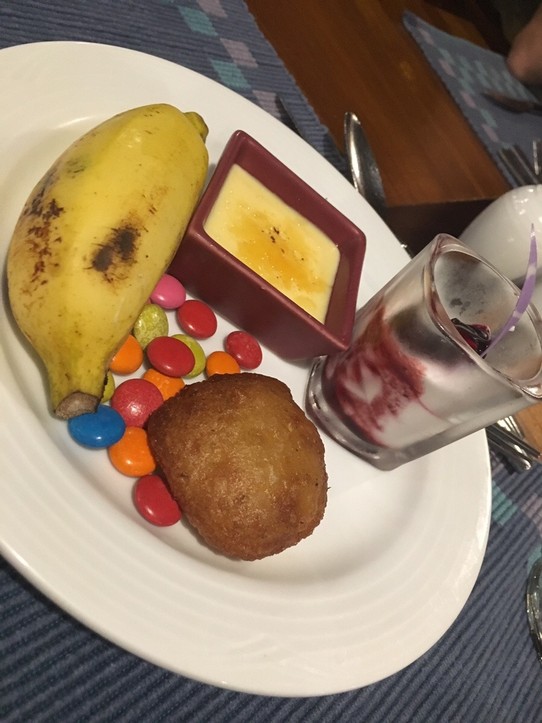 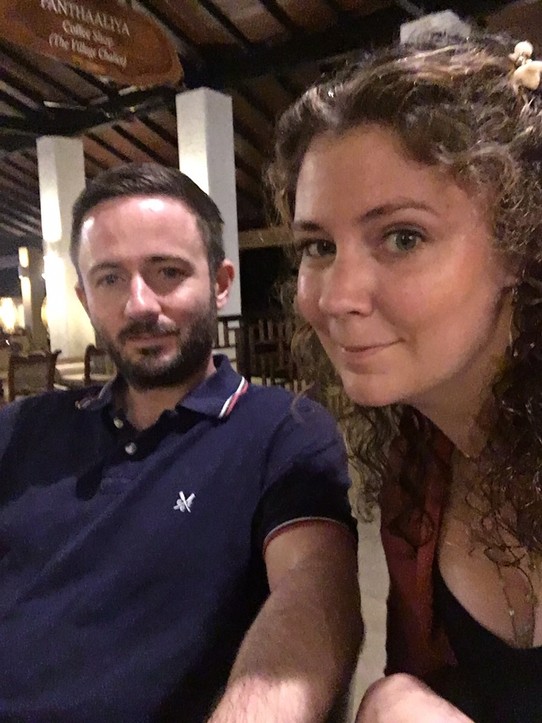 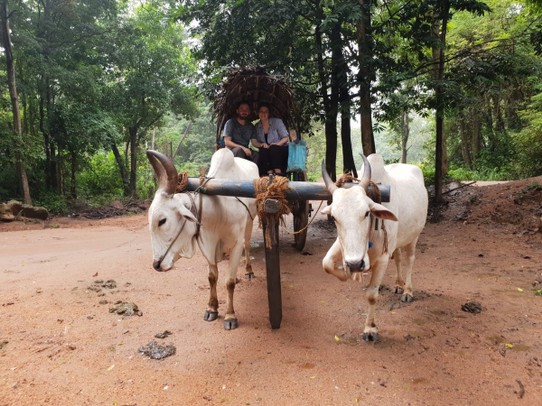 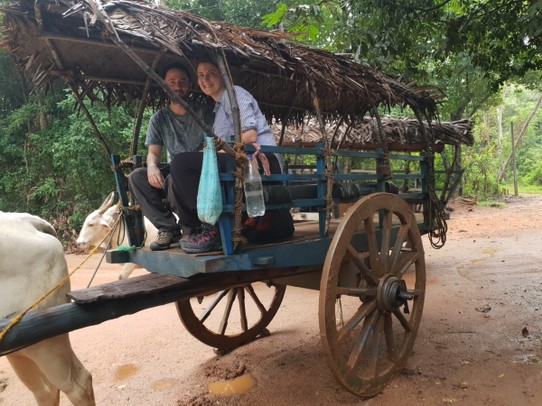