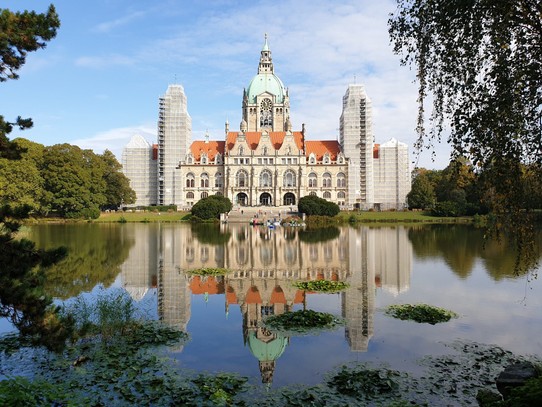 The New Town Hall
Hanover was a handy stop between Warsaw and London, and somewhere where we hadn't been before (our other options being Berlin and Cologne, both of which we had visited before). It is also an interesting place as it was the home of the Hanoverian royal family, who also became the English royal family through George I.

We were here for two whole days, and during whilst we were there it would be our 12 year wedding anniversary and would be going to a Michelin starred restaurant.

Day one it was a visit to the New Town Hall, an amazing building built at the turn of the 20th Century, and got to go up the slanting lift, a lift that moves up at a 17 degree angle to the viewing platform at the top of the dome. A bit of fun, and saved us the walking.

In the Town Hall was there was an interesting exhibition of Hanover during the ages, from the Middle Ages through to today, including 1939 before the Allied bombings and in 1945, showing the destruction. A bit of a different from seeing the destruction caused by the Nazis. Just as sad.

We had a bit of a wander through the town, and then went to the old hunting lodge and summer palace of the Hanoverian royal family called Herrenhausen. The lodge itself was not open to the public (now a conference centre), but the Italianate/English gardens were open to wander around. Which we did, for hours. There was also a boring museum about gardens (well for me anyway), and a less boring museum about the family.

The gardens were lovely and very well looked after, and we got there in time to see the fountains, which are the original 18th Century structures. Amusingly, the lady selling tickets couldn't remember the english word for fountains and instead called them "water toys" I walked into the gardens not knowing what to expect.

We were meant to go out to Marienburg Castle on the second day, but we didn't.

I went shopping for clothes for the dinner in the evening as I had realised I literally had nothing suitable to wear to a Michelin starred restaurant. C&A to the rescue again!

Dinner was lovely, and we hadn't eaten such refined food for months, and nary a piece of dill in sight!

I did feel a little guilty about not going out to the castle, but the weather wasn't amazing, and we would have had to take various buses etc. and it was the end of the line and we were tired.

Next stop Brussels for an overnight stop and then London. 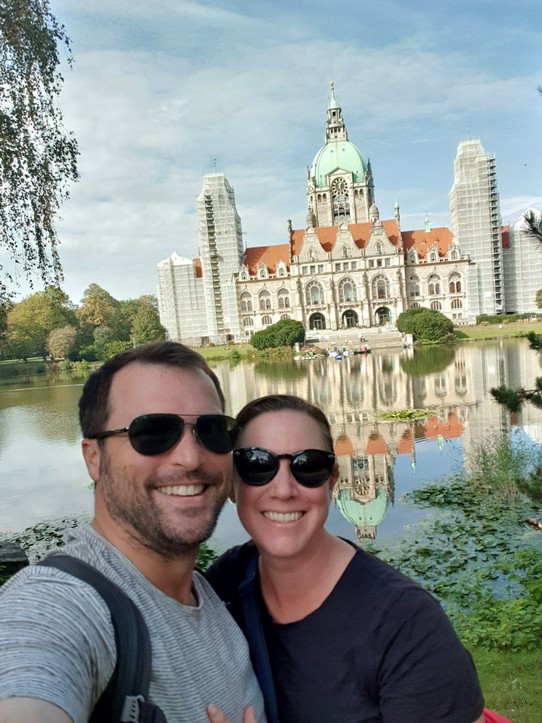 Us and the New Town Hall 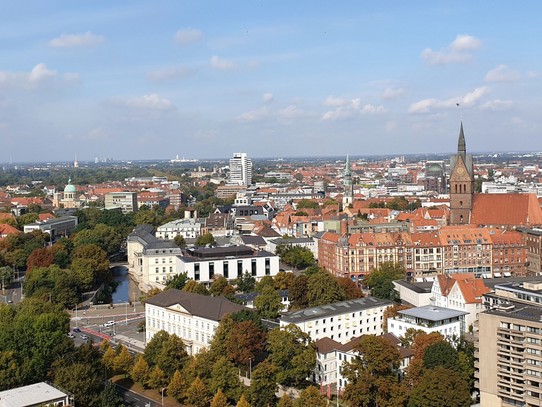 View over the "Old Town"" and out to Herrenhausen 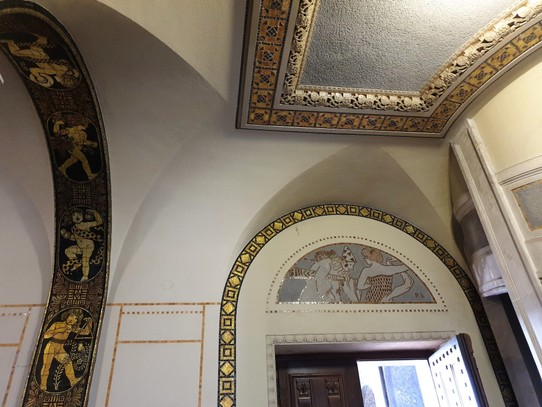 An art deco section of the New Town Hall 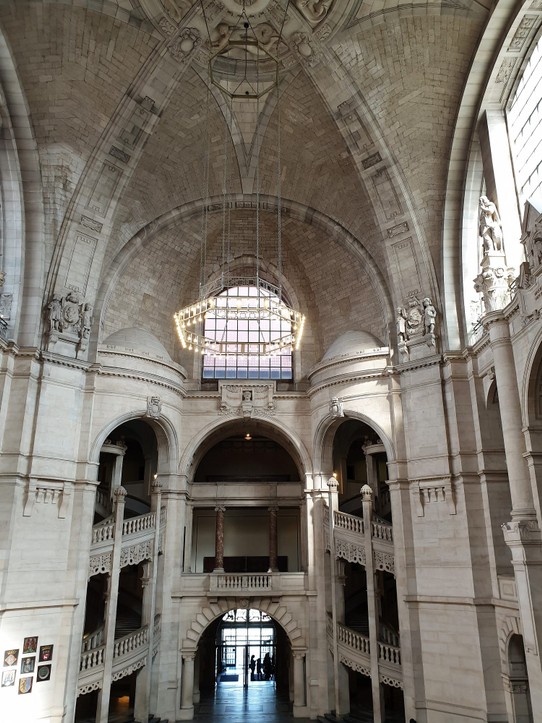 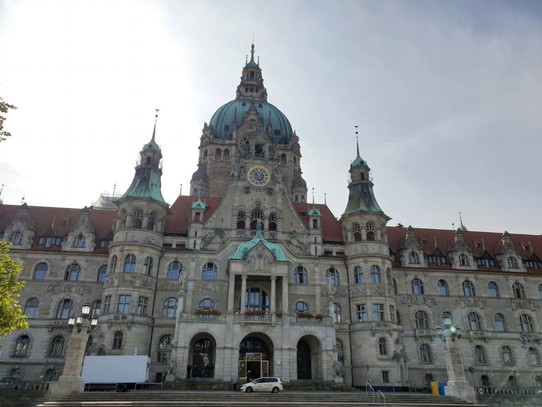 Front of the New Town Hall

A medieval church destroyed in WWII and left as a memorial 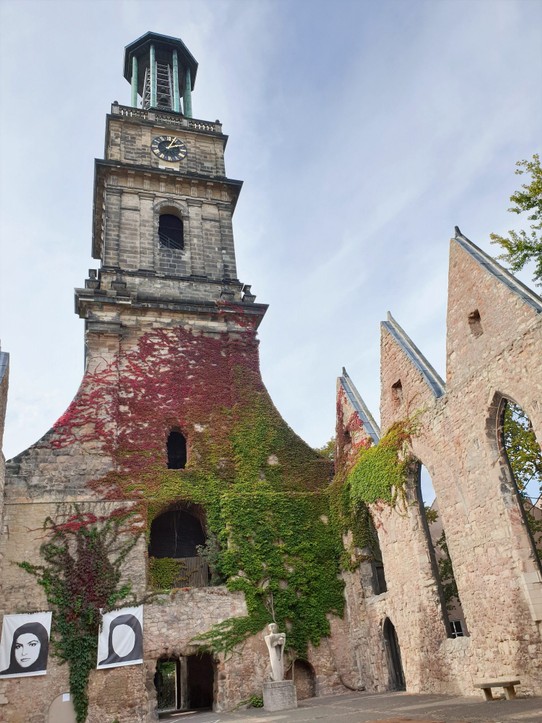 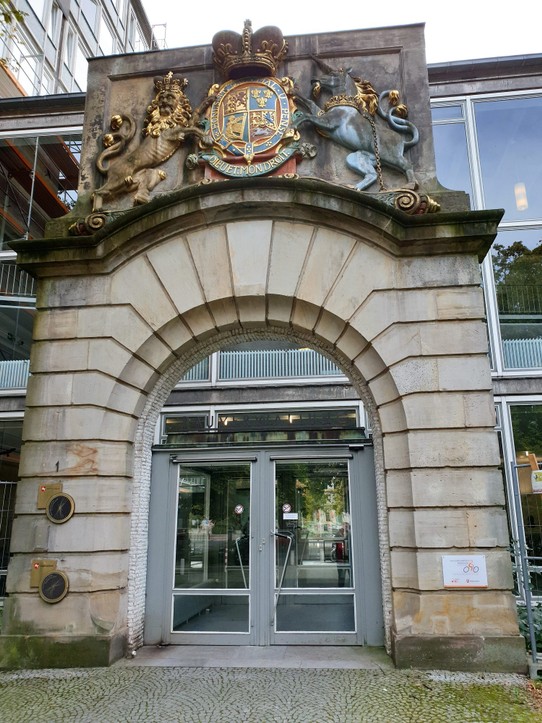 The British (Hanoverian) royal coat of arms, randomly in a square 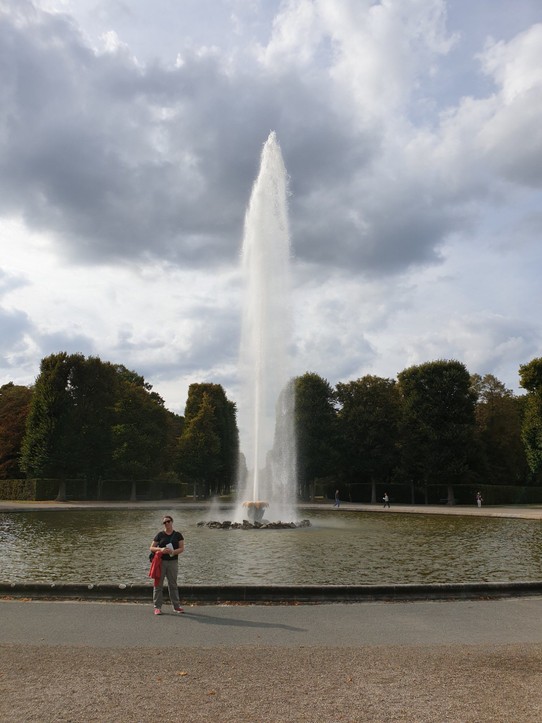 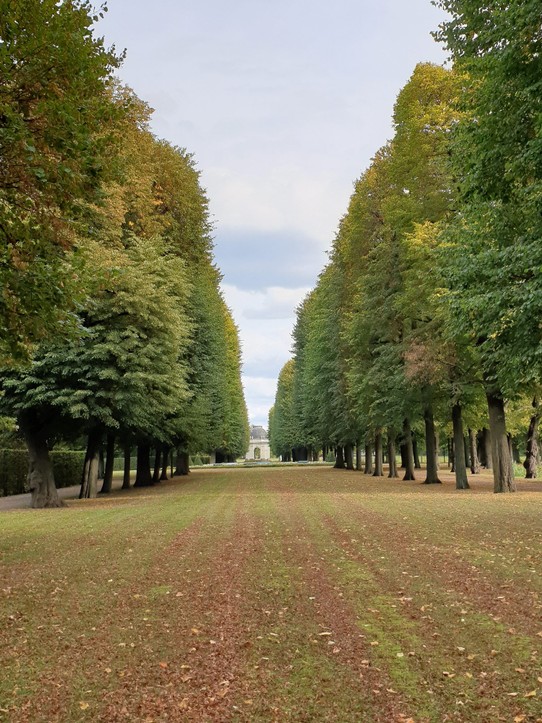 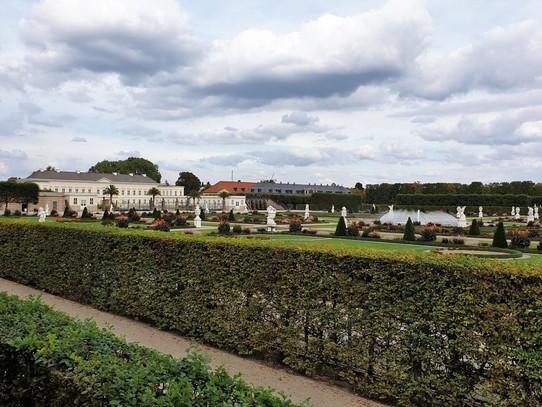 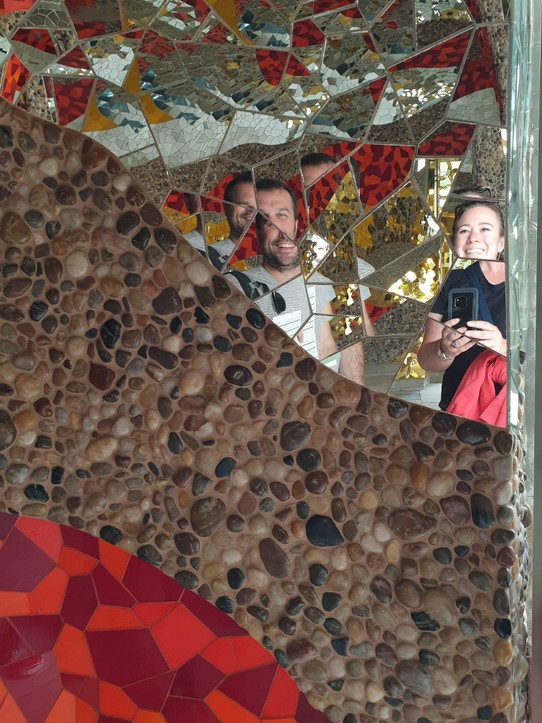 The modern grotto in Herrenhausen 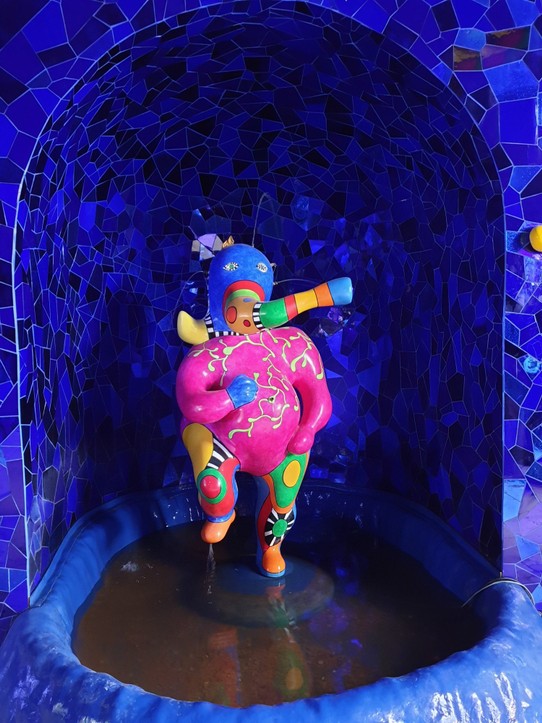 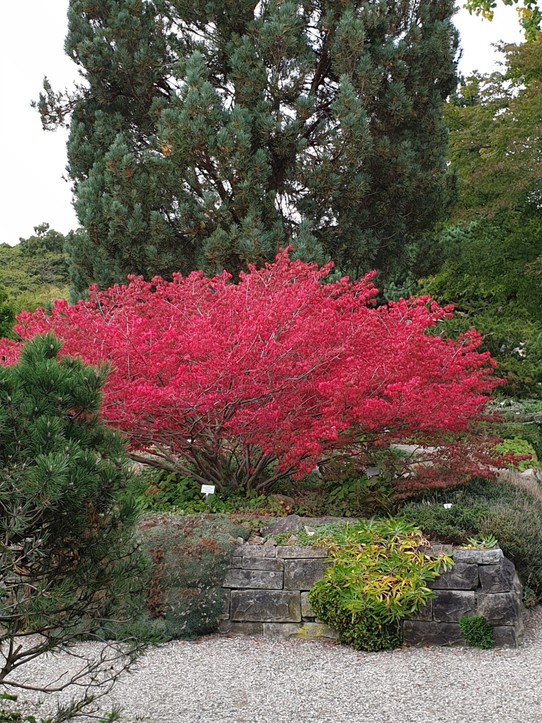 The botanical gardens at Herrenhausen 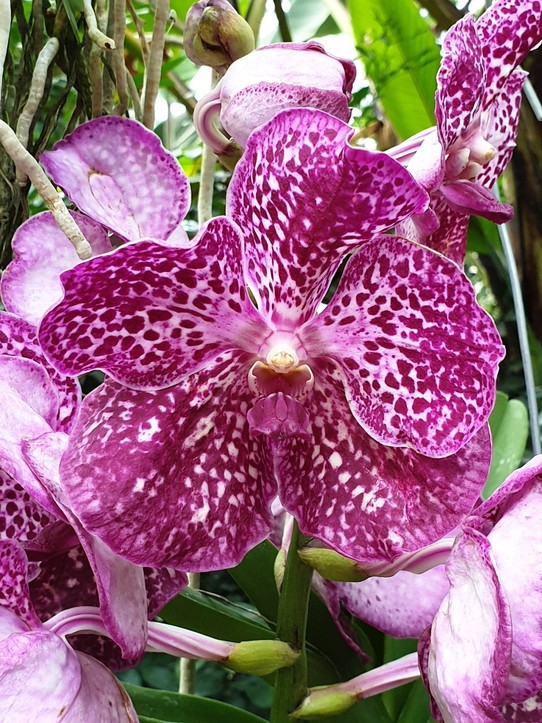 Couldn't help take pictures of the gorgeous orchids at Herrenhausen 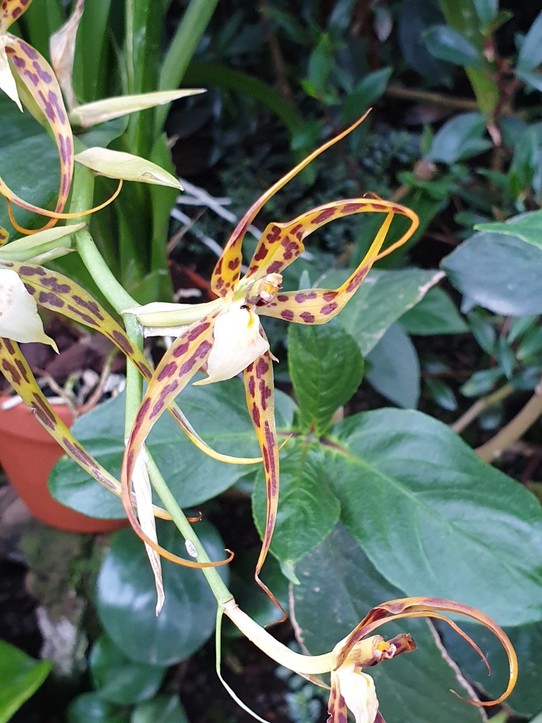 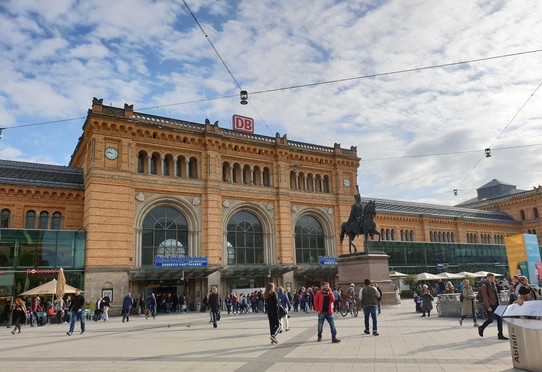